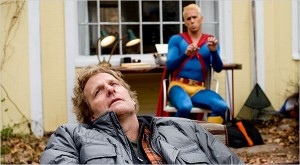 Behold the damaged man-child of great sensitivity, unable to live in a world of mere mortals or where age-inappropriate relationships with younger girls are largely not condoned! Pity the “Paper Man”! Jeff Daniels, as a performer, can usually do no wrong, but with the material provided by writer-directors Michele Mulroney and Kieran Mulroney, he’s left awash in all manner of silliness. Richard Dunn is a failed middle-aged novelist who retreats to a small Long Island town for the winter with his wife, Claire (a bitter Lisa Kudrow), in hopes of breaking his writer’s block. Things start badly in the first scene, when we meet Richard and Claire, but also Richard’s imaginary friend: Captain Excellent, played by Ryan Reynolds in a shock of bright yellow hair and a bold red, blue and yellow superhero costume. Twee and whimsy marry, leading to scenes with symbolic origami. Claire returns to her job as a cardiovascular surgeon during the week and, although childless, Richard hires the sad, 17-year-old Abby (Emma Stone) as a babysitter, and contrivances and symbolism pile on. Is Richard merely “done,” or is he mentally ill? Playing a dislikeable, increasingly pathetic character, Daniels is good, and Stone manages to find goodness and kindness in her underwritten character. With Hunter Parrish, Kieran Culkin. 110m. (Ray Pride)