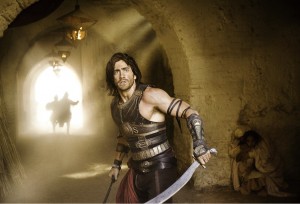 Once upon a time a brave little girl with a good heart stopped the gods from obliterating humanity with a sandstorm. Once upon another time, a brave little orphan dared to yell “stop” at a soldier on horseback thrashing a boy in the bazaar who pilfered an apple. The king saw a “king in spirit” in the first boy and adopted him. Fifteen years later, he’s a scrappy prince named Dastan (Jake Gyllenhaal) who meets a sacred princess named Tamina (Gemma Arterton, “Clash of the Titans”). She’s descended from that girl who saved the world, and is destined to do more of the same when an evil royal careerist seeks to load the hilt of a magic dagger with magic sand that fuels backwards time travel. Beware: if you tap into the entire world supply of magic sand, the world will end. On the run from everyone, Dastan and Tamina trick and tease each other, destined to fall in love and to say they make their own destinies. Some of this may come from the “Prince of Persia” video games authored by Jordan Mechner, also an executive producer. The rest is written by Doug Miro and Carlo Bernard, and directed with zest by Mike Newell (“Harry Potter and the Goblet of Fire,” “Four Weddings And A Funeral”). Walt Disney Pictures and Jerry Bruckheimer Films present an adventure in pillage: parkour chases riffing on “The Thief of Baghdad,” a plot line about faked intel on hidden weapons to justify an invasion as in “Green Zone,” a bad guy armed with super-whips like in “Iron Man 2,” security systems for ancient chambers from the same guild of engineers behind “Indiana Jones” and “National Treasure,” and extra-sensory assassins centuries ahead of “Men Who Stare at Goats.” For contemporizing comedy, Alfred Molina plays an ostrich race promoter and tax evader. Syncretism is on the call sheet for the art directors. Great CGI on the sixth century urban design. Really cool serpents. This is Orientalism for boys at all longitudes. With Ben Kingsley, Steve Toussaint, Toby Kebbell, Richard Coyle, Ronald Pickup, Gísli Örn Garoarsson. 103m. (Bill Stamets)