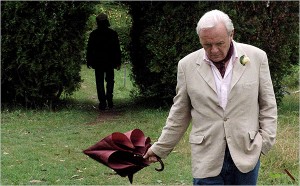 The only novelistic narrative less likely to convince than the one about the Great Man Who Writes Great Books is The Lesser Loser Who Struggles With The Estate To Write About The Great Man. It might work on the page, but on screen, it’s a dangerous venture filled with the possibility of endless missteps. “The City Of Your Final Destination,” a broken Merchant-Ivory film with a terrifyingly bad lead performance, still has patches and noodles of actor-y goodness around the edges. Young academic Omar Razaghi (the blissfully untalented Omar Metwally), refused permission to write an authorized biography of the late novelist Jules Gund, shows up unannounced one day at the verdant “Ocho Rios” in the wilds of Uruguay. While Ivory’s decorative skills are intact still—on the Titanic, he’d be nudging the divan onto a better-lit corner of the ship’s deck—the bickering among Gund’s heirs, brother Anthony Hopkins, widow Laura Linney, mistress Charlotte Gainsbourg—doesn’t have enough tempest for the most modest teapot. Hopkins plays droll, Linney fussy and Gainsbourg, the part of the eternal optimist.  Metwally’s puppy-dog would-be Boswell is a lesson in how a miscast central role can sink an entire movie. Speeches of varying quality from the marooned cosmopolitans ensue. The title is lovely, suggestive of something you might hear on Gainsbourg’s memorable 2006 album, “5:55.” Ah, but no. Written by the novelist Peter Cameron and Merchant-Ivory’s Ruth Prawer Jhabvala. Ismail Merchant, Ivory’s partner, died before this film’s making in 2007; post-production problems led to a lengthy delay before this belated release. With Hiroyuki Sanada, Norma Aleandro, Alexandra Maria Lara, Kate Burton. 118m. (Ray Pride)

“The City of Your Final Destination” opens Friday at Landmark Century and Renaissance.