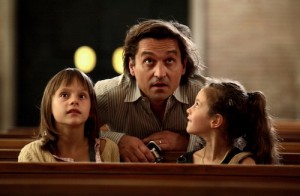 Mia Hansen-Løve’s “The Father Of My Children” (Le Pere De Mes Enfants) tells stories in the same fleet, restless fashion as Olivier Assayas. Yet she has an assured voice of her own as a filmmaker. As a young actress, she was at the heart of Assayas’ 1998 “Late August, Early September,” an oblique meditation on friendship, mortality and legacy. At 29, and the mother of his child, she’s made something remarkable and gracefully mature: a story about one protagonist, Gregoire Canvel  (Louis-Do de Lencquesaing), a producer of art films, that shatters into a story with several protagonists after a violent incident. Most notably, a strand of the story emerges with the Canvel’s eldest of three daughters, Clemence (played by de Lencquesaing’s own daughter, Alice) that suggests the natural path of a born cineaste. Hansen-Løve offers the offices of Canvel’s Moon Films, not as a place of carefree privilege or of cinematic dreams but as a dogged machine always one step behind, always in search of further finance for the dreams of his beloved, difficult auteur directors. (It’s neither “Day for Night” nor “My Life Is In Turnaround.”) There are turns in the tale better discovered than learned through synopsis: while the filmmaking is quietly observant, the examination of family, business, self-worth and the possibility of failure is bold and haunting. This is a beautiful, full-blooded film. (“The Father of My Children” won a special jury prize at Cannes in 2009.) (Ray Pride)

“The Father Of My Children” opens Friday at Landmark Century.