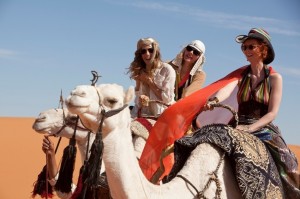 There is a scene in the 2006 James Bond movie, “Casino Royale,” where Daniel Craig is tied, nude, to a chair, and his testicles are repeatedly flogged. That looks like a whole lot more fun than “Sex and the City 2.”

At least there’s something physical going on, something to make the blood rush. The epic botch of writer-director-producer Michael Patrick King’s sequel to the 2008 film, based on the 1998 HBO series, which reportedly grossed $415 million worldwide, left an advance audience filled with women largely silent. A surprise, considering the low murmur, moan and giggle of anticipation when the bejeweled New Line Cinema logo spun onto the screen.

Opening at a white-on-white gay wedding officiated  by Liza Minnelli, the story turns to its central contrivance: the four pre-9/11 sitcom characters played by Sarah Jessica Parker (dim, cranky), Kim Cattrall (ballsy, punning), Cynthia Nixon (high-strung, red-haired) and Kristin Davis (little girl voice, child’s wide eyes) accept a free trip to Abu Dhabi, all-expenses paid  by a sheik. Jokes about the potential of white slavery are oblique,  reflecting the reality of the characters’ age. Still, it’s surprising, even shocking, to see how hostile the film is toward the Middle East, and its stock figures in the Morocco-shot version of Abu Dhabi. Even before a character is arrested for groping a man in a restaurant, you more readily sympathize with the offended locals than the gauche tourists. (A subplot involving exploitation of foreign workers by the Emirates plays on clichés of lasting love rather than the political implications.)

An opening scene with publicist Kim Cattrall at her desk, with Times Square panoramic in the background, brightly colored panties around her ankles as she moistens her privates with hormone creams, solidifies King’s view of the talented actress as a bull of a transsexual. (She’s so much better in “The Ghost Writer.”) King can’t make her look bad, she’s too game for the role, but rather than coming across as something so pneumatic she could single-handedly stem the BP oil spill, she comes off as a figure of lazy contempt to the filmmaker. These are the jokes, folks: “I am fifty-fucking-two and I will rock this dress!”; “It was a jumbo shrimp free-for-all at the raw bar”; “Is this because I’m a bitch wife who nags you?” Aha! That question by Sarah Jessica Parker’s Carrie to her husband, “Big” (Chris Noth) got the most gratified laugh of the night. (By my count, the word “bitch” is sparse, occurring only three times.) Gender’s not bent: these girls, I mean ladies, I mean, matrons, I mean, ladies of a certain age, remain stuck on the page. Ah, If only the wit sparkled, or perhaps trickled, as Mel Brooks once said of his own work, rising to feigned umbrage, “My dear woman, my work rises beneath vulgarity!”

Muddy-looking and unflattering in the extreme to its four leading ladies, “SATC2” does its actors no favors; cinematographer John Thomas seems to have mistaken Parker’s features for luggage.  Still, the film does pay attention to some design other than the drab-drag costumes. A hostile review of Carrie’s latest book in the New Yorker is accompanied not only by a facsimile of that magazine’s page design, but with an illustration that resembles the work of Tom Bachtell, who sometimes does caricatures for that magazine’s film reviews. Later, however, when Carrie shelves the neat-looking hardback copies of her slim body of work, they’re among several motley books, including one from Reader’s Digest. That‘s tackier than Cattrall’s bored timing.

Reportedly, “Sex and the City 2” had a $10 million costume budget, less tasteful and gaudier than even the most extravagant Cirque du Soleil spectacle. Rushing from the theater as the credits began after a Monday night screening, I found myself within a different rush of images. The halls and escalators and then the street were filled with young women; the girls leaving were dressed up, barelegged in the falling heat, all short summer dresses and chatter with their friends. They had style, potential, lives: so different from the movie they’d dolled up to see together.