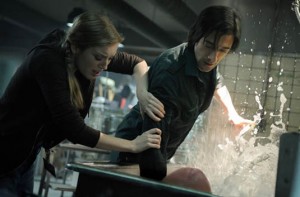 Unholy genome! Brainy horror, Vincenzo Natali’s “Splice” preys on a veritable blood bank of modern fears. Start with scientists who are bright enough to manufacture recombinant DNA from multiple animal strands yet foolish enough to think a world of laws and politicians will bow to their expertise and vision. Natali’s greatest fortune in his bluntly efficient tale is having Sarah Polley and Adrien Brody as his leads. Their line readings are inspired (“You’re Bob-fucking-Fosse” sounds better than it reads when it comes from a talented actor) whether comic or fearful, and both play at adults who still dress like teenagers. (The wardrobe of crisp, clever designer T-shirts must have had its own line item.) There’s a lot Polley can bring with her expressive features, including large, intelligent eyes, when her character is challenged or crossed, and both she and Brody are fully invested in Natali’s souped-up B movie.  (It makes up for the schematic quality of some of the psychology.) Brody and Polley’s scientific-duo couple are named Clive (think Colin Clive as Dr. Frankenstein) and Elsa (Elsa Lanchester, the bride of Frankenstein with the white streak of hair); we glimpse their earlier failed experiments in a lab fridge: Sid and Nancy; Bogie and Bacall; Bonnie and Clyde. Their killer output this time? Ginger and Fred. (Face the music and splice.) Their employers and keepers of the genetic copyrights expect materiel for medicinal-borne fortunes, but Clive and Elsa each have their own notions. The childless couple wonders: what if they could immediately extend their experiments to human DNA? If a killer contemporary screenplay is supposed to have a turn, veer or shift every ten minutes or so, upping the ante, Natali and co-writers Antoinette Terry Bryant and Doug Taylor have done a journeyman’s job, grafting from “The Bride of Frankenstein,” “Rosemary’s Baby” and the body-horror of work by David Cronenberg, especially “The Brood.” Hardly as weighty as its forebears, “Splice” is still engagingly bonkers. The trailers and commercials give away their human-hybrid’s rapid growth to maturity (like one of the doomed, prematurely aging children so beloved of the National Enquirer in the 1960s), but the complications are eminently deserving of the film’s R rating. Without giving away the plot’s turns, the script is striped through with implications: beyond morality and mortality, there’s the urgent subtext of parenthood as mad science: who knows what’s going to go wrong in any given upbringing? An endearing element that indicates the national origins of “Splice” like any number of other movies from Canada: the casual flinging of the word “fuck,” which under the rating system up north, doesn’t trigger a prohibitive-to-teenagers rating.  Natali’s earlier, lower-budgeted work includes Netflix favorites “Cube” (1997) and “Nothing” (2003). 104m. (Ray Pride)