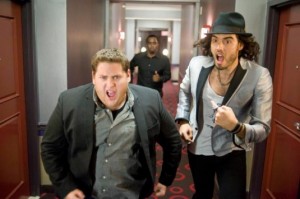 Writer-director Nicholas Stoller follows up “Forgetting Sarah Marshall” (2008) by taking two of its side characters and dropping them into a buddy-road-romantic, intake-abuse comedy. If you have not forgotten the Brit rock star overserved with boundary deficits and the worshipful waiter with passive-aggressive aspirations for a songwriting career, Brit comic Russell Brand is back as the same Aldous Snow, and Jonah Hill returns renamed as Aaron Green, now a 23-year-old intern at an L.A. record company. A totally major major Snow fan, Aaron comes up with the idea of relaunching Snow’s freefalling career with a tenth-anniversary comeback concert at the Greek Theatre in Los Angeles. His manic boss (Sean Combs) okays the plan. For getting Snow to show, handler and talent get from London to L.A., with side trips to The Today Show in New York and parties in Los Vegas, a frantic itinerary greenlit by producer Judd Apatow (“Forgetting Sarah Marshall,” “Funny People” and eleven other comedies in the past five years). Both characters work out their girlfriend stuff, with a three-way breakthrough with regrets. The film takes uninteresting positions on sobriety and monogamy, approving of both, in ways Ronald and Nancy Reagan would too. Least original is the duo tripping on a custom omni drug and regretting that too. A “Brüno”-borrowed bit about a white entertainer exploiting an African infant earns a cheap laugh or two, if only for exploiting comic exploitation. Stoller invents uninspired obstacles and detours as the big gig looms. The Aldous–Aaron bonding is a bore. Offhand art direction or underused second units manage to make London, Manhattan and Las Vegas look almost the same. Mockery of the music scene is limited to grotesquely tacky decor in every interior. Wondering what you miss by not staying through the end of the credits? “Go home! Get the fuck out of the theater! The movie’s over!” The best lines in “Get Him to the Greek” come at the beginning; it’s worth watching for about ten minutes. Twenty, max. With Rose Byrne, Elisabeth Moss, Colm Meaney, and as themselves: Pink, Billy Bush, Kurt Loder, Christina Aguilera and Meredith Vieira. 109m. (Bill Stamets)