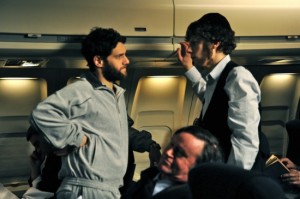 Jesse Eisenberg may be the best of the young actors cast by American indie directors as willowy ditherers of one kind or another; there’s something epic about the layers of callowness that peel away from his performances in “Roger Dodger” and “The Squid and the Whale.” In Kevin Asch’s “Holy Rollers” (based on true events from the late 1990s), Eisenberg plays Sam, a young Hasidic Jew, son of a fabric maker, who is tempted by neighbor Yosef (Justin Bartha) into a job as a mule ferrying Ecstasy from Amsterdam. It’s an intriguing premise, but the execution’s superficial; it’s no “The Hasids Are All Right.” Eisenberg and Bartha seethe capably, but Antonia Macia’s screenplay needed to say something larger, or even more compellingly intimate, about the young Hasid’s rebellion against his religious and social order, to become memorable. Otherwise, it’s one more “second-generation-immigrant seeks freedom through crime” saga (see under: “Mean Streets,” “The Godfather,” “Scarface”). The Brooklyn locations, in Crown Heights and Williamsburg, are a grimy, thrilling eyeful.  With Q-Tip, Danny A. Abeckaser, Ari Graynor, Jason Fuchs, Bern Cohen, Mark Ivanir, Charlie Hewson, Elizabeth Marvel. 80m. (Ray Pride)