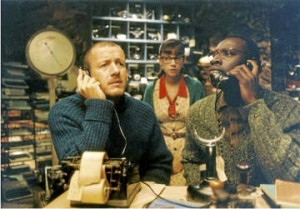 Jean-Pierre Jeunet (“Amelie,” “The City of Lost Children”) is a master tinkerer. Slick cuteness and childlike sentiment are in his toolkit. Contraptions, optical ones in particular, pop up in his enchanting fabulations. One of Mussolini’s preserved eyeballs is prized by a collector in his latest movie. Improvised machinations are key to his coincidence-flecked plots and decor by bricoleurs. He also borrows ever so widely and wisely. For his adorable “Micmacs,” he cites as inspirations “Mission: Impossible,” “Toy Story” and “Snow White and the Seven Dwarfs.” Bazil (Dany Boon) is employed as a clerk at a video store until a stray bullet lodges in his brain. He comes upon its manufacturer, and then discovers that right across the street is the manufacturer of the anti-personnel device that left him fatherless three decades ago. Jeunet pits our hero and his gang of gizmo-gleaners against vendors of armor-piercing bullets and landmines. Those capitalists of civil strife boast of the bloodshed in a Sarajevo market on February 5, 1994, along with genocide in Darfur and bringing down a Boeing airline, as outcomes of their wares. Bazil conspires against these archrivals in a setup recalling “Lucky Number Slevin.” Bigger ingredients, though, are sweet witty bits of physical comedy in debt to Chaplin, Keaton and Tati. Eight excerpts of classic scores by Max Steiner are sampled, as well as the look of Warner Bros.’ credit sequence from “The Big Sleep.” Jeunet’s cluttered affections for film craft lead to a tribunal held in a simulated Somalia, with a YouTube kicker. “Micmacs” is a fairy tale confection with an international justice agenda. With André Dussollier, Nicolas Marié, Jean-Pierre Marielle, Yolande Moreau, Julie Ferrier, Dominique Pinon, Michel Crémadès, Marie-Julie Baup. 104m. (Bill Stamets)