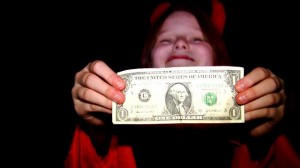 Michael Palmieri and Donal Mosher’s “October Country” is easily one of the most gorgeous, even lustrous downer documentaries I can think of. Its intimacy in portraying four generations of a troubled family living in upstate New York’s Mohawk Valley is to be both admired and feared. Mosher, a photographer, had chronicled the generations of his dysfunctional, working-class family, and collaborated on this film with Palmieri. “Family is everything,” one subject says, and boy, is it. Book-ended by Halloween imagery, “October Country” more than earns the comparisons that have been made to “Capturing the Friedmans” and “Grey Gardens,” with the substantial gift of a lyrical visual style. Harrowing family secrets emerge in a world of beauty. Each unhappy family member is unhappy in their own way, and is articulate about the causes if not the means to escape their condition. There is a radiant, 11-year-old glimmer of hope in the film (pictured); you fear for her, as well. “October Country” may be a masterpiece, I’m not certain, but I still squirm when I think about it, even though I’ve seen it several times in the past year.  80m. (Ray Pride)