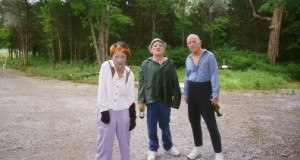 Harmony Korine, as screenwriter and director, has had his ups and downs over the years, filling some of the downtime with ventures into novels, artists and artists’ books. The exuberant, garish escapade that is “Trash Humpers” looks toward the art gallery in the rearview but toward incidental, short-feature-length narrative on the horizon ahead. Korine’s entertaining interviews on the subject of the latest film have included the sentiment that “Trash Humpers” should seem like an object found in a ditch. Shot on late-1980s-era VHS cameras and edited with equipment that retains the jagged rainbows of erase-head start-stops on the finished project, the 37-year-old filmmaker’s fourth feature released in theaters looks (and behaves) like no other movie that comes to mind. Shot at night around his Nashville neighborhood, the film takes the form of vignettes, or “skits,” a word Korine might appreciate, following the boisterous exploits of a group of senior citizens (including Korine and his wife) in rubber masks that wouldn’t look out of place at Leatherface’s family picnic. These aged souls like to, well, hump trash carts, fences, tree branches. They’re celebrating. What are they celebrating? The mere fact of being alive, I’d like to think. Superficially disturbing, yet weirdly festive and triumphant, this mock-documentary is Korine’s most formally accomplished production. Something deeper, darker, accrues from the post-adolescent prankishness. If we survive, we will all grow elderly, lunatic and happy-go-lucky. There are disturbing images, including cavortings with prostitutes and a generalized contempt for baby dolls, which the crew consistently mistreat. Co-produced by Agnes B., “Trash Humpers” is the first film distributed by Chicago’s Drag City. 78m.  35mm. (Ray Pride)

“Trash Humpers” opens Friday at Siskel. Korine will appear after Friday’s 8:45pm show. The “Trash Humpers” website is here. A trailer is embedded below.