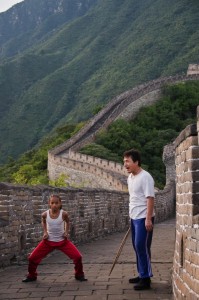 Jackie Chan delivers the most impressive performance of his mid-career, far better than his embarrassing paycheck for “The Spy Next Door.” In “The Karate Kid” he’s a maintenance man at a Beijing apartment building who mourns the wife and son he lost in a car accident—a character rather like the Japanese-American maintenance man at a Reseda, California apartment building who lost his wife and daughter in childbirth in “The Karate Kid” released in 1984. In both movies, this character is a father figure to a fatherless American kid who moves into his building and knows a little karate; the Italian-American high school senior learns more karate in the original film, and the African-American 12-year-old learns kung-fu in the 2010 remake. Unbelievably, Chan thinks the two movies are “totally different,” as he told WGN-TV entertainment reporter Dean Richards. Maybe Chan is thinking of the differences between the number of bullies accosting the kid (five versus six) or the number of minutes the referee allots the injured kid before forfeiting the big tournament (fifteen versus two). Director Harald Zwart (“The Pink Panther 2,” “Agent Cody Banks”) and writer Christopher Murphey surpass the 1984 film and its 1994 remake titled “The Next Karate Kid” that starred Hilary Swank as the kid, a fatherless and motherless Boston teen who moves to neither California nor China. A key addition to the new film is the attention to cultural context, with an assist from credited consultant Franklin Perkins, a DePaul University associate philosophy prof who specializes in Leibniz’s fascination with China. (Never mind producer Jada Pinkett Smith’s observation: “China is extremely unique.”) Her son Jaden Smith (“The Pursuit of Happyness”) lights up the screen as Dre, an ex-Detroiter. His 1984 counterpart’s love interest could only play a boombox; now Mei Ying (Wenwen Han) is a classical violinist whose aspirations and parents get screen time. This touching bi-cultural coming-of-age family fare boasts bilingual end credits and no martial arts bloopers. With Taraji P. Henson, Rongguang Yu, Zhensu Wu,  Zhiheng Wang, Zhenwei Wang. 131m. (Bill Stamets)