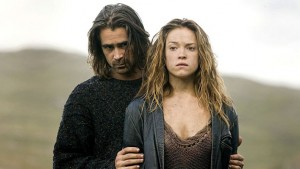 In a period before Neil Jordan shifted his long-awaited epic about the murderous Borgia family to a forty-hour Showtime series, the Irish writer-director turned his pen to fairytales again, and the result is “Ondine.” We all should do so well with periods of enforced inactivity. Blunter than “The Company of Wolves” or “The Crying Game,” it’s still far superior to his epic misfires like “In Dreams.” The characters talk fairytales to each other; happenstance becomes lore, lore fuels hope. On a slate-to-blue overcast morn in a small Irish seaside time, Syracuse (Colin Farrell, an increasingly fine actor) the fisherman, a reformed alcoholic, makes an unlikely catch: a beautiful woman who may or may not be a selky: a seal from Scottish myth. She calls herself Ondine (Alicja Bachleda) while speaking halting English in an indeterminate accent. Syracuse has a daughter, Annie (Alison Barry) suffering kidney failure as well as an accelerated vocabulary that matches the grace of the tellers-of-tales in her town. She’s extremely talkative and direct. Still, most of “Ondine” escapes the curse of being too on-the-nose with its dialogue. The nicely carpentered structure is the quieter handicraft of the screenplay (with less-than-convincing bursts of violence). Syracuse tells Annie stories about the woman he’s stashed in an exquisite cove where his mother left him a charming shack, and Annie responds with fairytale details she’s learned. In some of seventeen features, Jordan can be enamored of foregrounding the act and fact of storytelling, yet whenever “Ondine” threatens to go chill in the cold ocean waters, Jordan’s visual lyricism comes to the fore, courtesy of cinematographer Christopher Doyle (much of Wong Kar-Wai’s work, Gus van Sant’s “Paranoid Park,” Jim Jarmusch’s “The Limits of Control”). While capturing the fulsome gloom of rainy Irish weather, Doyle also plays with the boundary between fantasies and the “quotidian,” as Annie calls the everyday, with evocative play with lighting, colors and texture. (He’s also very good at capturing young Barry’s green, almond eyes: she’s more otherworldly in her loveliness than the shapely, oft-near-naked Bachleda.) There are half-a-dozen luminous instances as stirring or haunting as anything Jordan has done. These touches come in bursts; most of the film is paced with wry assurance. “Ondine”‘s dialogue is studded with verbal flourishes, the loveliest and most unlikely coming from chatty Annie’s mouth. I’m still gobsmacked by Barry’s delivery of the line, “Of course it’s real. It’s Sigur Rós.” There’s a sweet visual pun that seems to prove the fantasy that slips by quietly, in dusky light; it’s given far too much prominence on the U.S. poster. Jordan cut an explicit love scene after the film’s 2009 Toronto premiere; without having seen that version, which some viewers loved, I’d surmise it didn’t fit into the dreamy character of that part of the film. But, as Farrell and Bachleda reportedly became a couple during the shooting, it’ll likely be a much-viewed DVD extra. With Tony Curran, Dervla Kirwan, Stephen Rea. 103m. (Ray Pride)