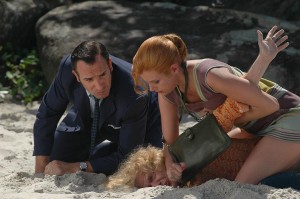 French director Michel Hazanavicius, writer Jean-François Halin and actor Jean Dujardin follow-up “OSS 117: Cairo, Nest of Spies” (2006) with another international spy movie comedy. Both are based on the pre-James Bond novels by Jean Bruce about Office of Strategic Services agent 117. Their last film, set in Cairo in 1956, ended with the debonair buffoon Hubert Bonisseur de la Bath (Dujardin) learning his next assignment is in Iran. His boss briefs him: “Iran is beautiful. They really appreciate Westerners.” This more successfully paced and put-together film continues his misadventures with more chases, scenery and over-the-top faux pas. It’s 1967 and OSS 117 is off to Brazil to buy microfilm listing French WWII collaborators from Nazis scheming a Fifth Reich. The map places them in “Uberlandia.” Last time the scandalously unsavvy operative teamed up with a sexy Egyptian agent and insulted Islam. This time he teams up with a sexy Mossad agent and does Israel and Jews no favors with his insouciant idiocy. It’s almost too stupid to register as antisemitic. His full-flowered sexism, though, is slightly more thought-through due to all the females throwing themselves at him. Free love, women’s lib, long-haired hippies and an LSD-catalyzed orgy cannot knock this Cold War avatar off his game. “Change the world?” he guffaws. “The world is fine!” In Cairo, OSS 117 flashbacked to cavorting on the beach and laughing madly with his dearly missed male comrade. In Rio this one-time trapeze artist is tormented by the memory of his partner slipping from his grasp and falling to his death. That nod to “Vertigo” comes with another to “North By Northwest.” Disregard any alleged linkage to the spoofy films from the sixties where Dean Martin played spy Matt Helm, based on books by Donald Hamilton. The four I just watched were witless about the genre. Hazanavicius insists neither of his OSS 117 films are parodies of period films, but they are delectably risque exercises in political incorrectness. With Louise Monot, Rüdiger Vogler, Alex Lutz, Reem Kherici, Pierre Bellemare, Ken Samuels. 97m. (Bill Stamets)