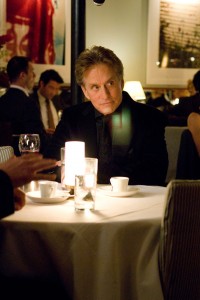 Michael Douglas is back, with an unapologetically acerbic turn as an arrogant loser in “Solitary Man.” The 65-year-old actor’s career as a leading man has distinct stages. While known as second banana to Karl Malden in TV’s “Streets of San Francisco,” he was nurturing his career as a producer, notably with a property his father, Kirk, owned: “One Flew Over the Cuckoo’s Nest.” Other successes followed, including “Romancing The Stone,” but as an actor, he bloomed in the 1980s and nineties when he embraced his inner sonofabitch, tackling some of the ferocity his father had almost always steeped his characters in. Even considering only “Fatal Attraction” (1987), “Basic Instinct” (1992) and “Wall Street” (1987), here is a man who embodied the selfish shit, playing the vain, venal American male for all he thought he was worth. 2000’s “Traffic” and “Wonder Boys” were stellar turns, and then he took a step back. Now, after a period of time spent as second banana to wife Catherine Zeta-Jones, the 65-year-old is taking roles in non-studio pictures, and his Ben Kalmen in “Solitary Man,” directed by Brian Koppelman and David Levien (writers of “Rounders,” “Oceans Thirteen,” “The Girlfriend Experience”) and written by Koppelman, is superb. As a middle-aged car dealer—”the Tri-State area’s honest car salesman”— whose career and personal life soundly collapsed a few years earlier, Douglas isn’t playing the tyrannical financier, Gordon Gekko (a role which he just reprised), but a man with a glimmer of a second chance, if only his bad impulses, not limited to lying and womanizing, don’t take him down. The large, talented cast—Susan Sarandon, Danny DeVito, Mary-Louise Parker, Jenna Fischer, Jesse Eisenberg, Richard Schiff, Olivia Thirlby and Imogen Poots—does terrific work with Koppelman’s incisive character studies, but it’s Douglas’ Kalmen, shown as unpleasant and lonely, demonstrated largely without judgment, that is the richest role. Damage finds its own level—Kalmen is surrounded by enablers. It’s a smaller study than Douglas’ epic turn in Curtis Hanson’s great “Wonder Boys,” but a wonder of its own, an alpha male who’s never met his zed. 90m.  (Ray Pride)