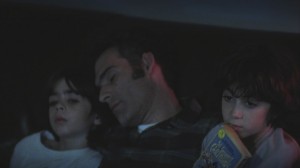 “I would be the first one out of a job if there were no movies or commercials, but I would not miss them,” Michel Gondry told me while promoting “Be Kind, Rewind” in winter 2008. He published a slim book about the same time, called “You’ll Like This Film Because You’re In It: The Be Kind Rewind Protocol.”

There are a few pages of passages like, “I believe in systems. Well, not the big and vague entity that seems to run the world against everyone.” While brief, it’s valuable, as his French accent is near impossible to transcribe, no matter how fluent and charming he sounds in person when you interview him. Most of the book is composed of exercises and structures drawn from his tries at teaching a group of youngsters with disparate ideas. “”There was a lot of of compromising that ultimately [creates] some absurd narratives. It’s a mix between an exquisite corpse and Scrabble.”

The first feature co-directed by Josh and Benny Safdie, the scrappy shaggy-dog tale of epically failed parenting, “Daddy Longlegs” (known variously on the festival circuit as “Lenny and the Kids,” “Go Get Some Rosemary” and “Rosemary”), brings Gondry’s privileged utopianism to mind. In the future—or even right now—who are filmmakers making their work for? (With Monday’s introduction of the latest iteration of the iPhone, with iMovie editing software installed, it could be as few as two.) The Safdies made well-regarded shorts, and Josh made an earlier feature, 2008’s “The Pleasure of Being Robbed” about a young female pickpocket in Manhattan.

The Safdies, now in their mid-twenties, say the story of “Daddy Longlegs” is based on their own father, who chased them around with a Super 8 camera when they were small and growing up in New York. You can only hope that the things that happen in “Daddy Longlegs” are fond exaggerations, tall tales borne of minor parental infractions.

Lenny (Ronald Bronstein) has never grown up, with behavior as arbitrary as a rADDled child’s mind. Working as a theater projectionist, living in a cramped Midtown studio, he’s allowed occasional visitations with his two boys, Sage and Frey (Sage and Frey Ranaldo). All have NYC cred: The kids, children of Sonic Youth’s Lee Ranaldo, play especially cranky, violent towheads, and Bronstein directed the remarkable, bleak “Frownland,” about an even more misfit character. Over a particularly fraught two-week period, Lenny’s negligence goes as far as giving the kids bits of grown-up sleeping pills when he needs time away from them; the “absurd narrative,” to use Gondry’s phrase, is more forgiving than Lenny’s doctor friend who doesn’t call the cops or social services. Soon, a random bit of vandalism lands him in jail instead. This story is more “Lenny vs. Lenny” than “Kramer vs. Kramer.” Bronstein’s performance is intense and intensely happy-go-lucky even when he fucks up royally. Its scariest aspect may be that the character is even more frightening than the genuinely scary Abel Ferrara as a menacing mugger.

Among emerging lo-fi filmmakers, the scuzzy grain of the Super 16 format they’ve chosen sets their work apart from the exploratory, sometimes meandering work often clubbed with the “mumblecore” label. It’s film, not digital video. The m-word’s not much use here: this small ship hails those passing steamers named The Francois Truffaut and The John Cassavetes. Cassavetes for unwillingness to explain or judge; Truffaut for his insight into the mind of the child, especially in “Small Change” (1976). Recently, the Safdies joked to Interview magazine, “If Jean Vigo, John Cassavetes, Buster Keaton, Woody Allen and Charlie Chaplin had a deformed child, we would be their best friend.” Cineaste self-consciousness, but pretty apt.

Their unresolved ending is both Sisyphean and celebratory: Lenny, having offended a moving man, carrying a refrigerator on his back onto the Roosevelt Island tram. The bold red car rises into the sky, moves toward the horizon: the story has only begun. Tragedy? Everyday and inevitable.

Whether careers are sustainable in lo-fi, no-budget production, a personal, idiosyncratic, even awkward movie like “Daddy Longlegs” demonstrates that the course of filmmaking itself is sustainable. That is, with good fortune, intimate collaboration, invention, innovation, talent… and youth.