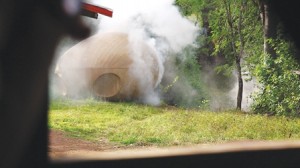 A Letter to Uncle Boonmee

Experimental filmmaking lives and thrives. Here are highlights of the opening night of the 22nd Onion City festival. School of the Art Institute alum Apichatpong Weerasethakul, who won the Palme d’Or at Cannes for “Uncle Boonmee Who Can Recall His Past Lives,” began that project with the short, “A Letter to Uncle Boonmee,” an atmospheric piece set in a small Thai jungle village.  Emily Vey Duke and Cooper Battersby’s found-footage-animation hybrid, “Beauty Plus Pity,” makes witty play of hunters-vs.-animals and ends with an animated musical number by animal “gods.” Janie Geiser’s “Ghost Algebra” is lovingly treated animation about a woman’s mysterious voyage. Daïchi Saïto’s “Trees of Syntax, Leaves of Axis” is hand-processed 35mm film of a forest scene, scored by violinist Malcolm Goldstein. The flicker of its color variations is enhanced by the bold, sawing score. Sharon Lockhart’s “Podwórka” is a gorgeous portrait of the battered courtyards between apartment buildings in Lodz, Poland. Children play, dogs sniff, the sounds of the city are more distant than birdsong. Striking compositions and rich color add to the hypnotic effect. Jia Zhang-ke’s gentle “Cry Me a River” is as elusive as his recent features, as a quartet of thirtysomething former students meet to celebrate a professor’s birthday. Their exchange of memories since their parting is, in the director’s words, his attempt to  “see if I could tell a story that spanned ten years in fifteen or twenty minutes.” Visually beautiful and emotionally tender, comparisons to Ozu and Hou Hsiao-Hsien are instructive but do not convey its delicate, memorable fragrance. (There’s even a joke about Hou’s muse, the actress Shu Qi.) Program 105m. (Ray Pride)