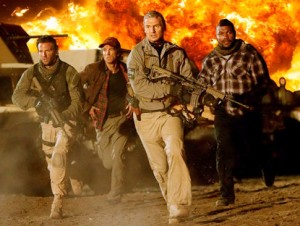 Attacking the CIA as corrupt, this comic anti-American action film is anti-corporate to boot: the CIA’s co-conspirator in a scheme to counterfeit hundred-dollar bills is none other than Black Forest, an evil contractor named after the former Blackwater USA (now called Xe Services LLC). Based on ninety-eight episodes of the 1980s NBC series, the good guys are four Army Rangers who’ve accomplished eighty missions in the past eight years. Now they execute a bunch of fun escapes, attacks and extractions in Mexico, Iraq, Germany and California. Director Joe Carnahan earlier looked at dirty cops in his “Narc” (2002) and risky cons in “Smokin’ Aces” (2006). He writes “The A-Team” with Jim Piddock, Skip Woods and Brian Bloom, who plays the Black Forest operative Pike. The original Mr. T. character is reprised by Quinton “Rampage” Jackson as a Gandhi-quoter with “Pity” tattooed on four knuckles of one hand and “Fool” on the other. Bradley Cooper plays the cute one who hides little metal implements in his mouth for getting out of jams when fast talk cannot. Sharlto Copley from “District 9” plays the nutcase who dabbles in recreational electroshock. Their leader is played by the fatherly Liam Neeson, who insults Black Forest employees as “assassins in polo shirts” and taunts a CIA spook: “Shouldn’t you be installing a dictatorship or overthrowing a democracy?” Later, the spook cracks: “The CIA’s got rules—our rules are just cooler.” Topical commentary includes lethal military retaliation against Mexicans trespassing on Arizona airspace, and a ward of mental patients cheering a fourth-wall-breaking 3-D film screening. “Overkill is underrated,” observes an A-Teamer, speaking for all concerned in this fun summer popcorn-peddler. The leftover bit after the end credits is not to wait for. With Jessica Biel, Gerald McRaney, Patrick Wilson. 118m. (Bill Stamets)