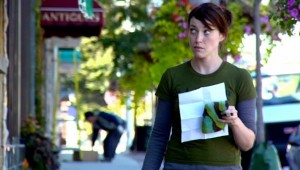 Life’s a grind, but it’s better than the other option, right? The lovingly bruised “Audrey the Trainwreck” is a melancholy meditation on early-onset adulthood, told through the interactions of two young depressives who may be tumbling toward a relationship,  characters adrift in their own ways, hoping for love, or perhaps just a little reassuring simplicity. Chicago writer-director-editor Frank V. Ross’ fifth feature is freighted with the heightened ordinary and his comedic and dramatic instincts are wrapped in a rare concern for the lowered expectations of the modern middle-class. “I can say I’m not afraid of anything, because there’s a lack of options,” one character says; the observation is dry, even though it’s coming from a resigned place in her heart. Ross’ most intriguing pattern is how the everydayness of the jobs and pursuits are interrupted by bits of conflict and violence or unexpectedly apt humor. (In life and in drama, inertia needs to be punctured.) The violence is, well, funny. A message to take away: Watch out for errant barroom darts. The leading characters may be morose, but terrific comedy rises from their condition. I have a sneaking suspicion Ross has watched a lot of Robert Altman, often and observantly, but he also seems to be defining his own territory as a concerned yet compassionate onlooker to how emotions play out in an economically constricted decade. Another hint: there’s an outlandishly ambitious amount of speaking parts. And the talk is good. With Anthony Baker, Alexi Wasser, Danny Rhodes, Rebecca Spence, Joe Swanberg, Jess Weixler and Nick Offerman. Ross edited Robert Byington’s “Harmony and Me”; cinematographer David Lowery also directed the fine children-on-the-run fable “St. Nick”; the effective score is by jazz composer John Medeski.  (Ray Pride)

“Audrey the Trainwreck” plays Siskel Saturday 8pm, Monday 6pm and Wednesday 8pm. Ross will appear at all three screenings. A trailer is embedded below.