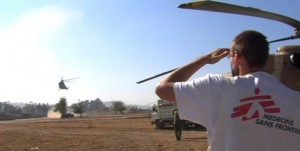 One of the most committed of non-governmental humanitarian organizations is the Nobel Peace Prize-winning Doctors Without Borders (founded as Médecins Sans Frontières, or MSF). Mark Hopkins’ fine documentary, “Living in Emergency: Stories of Doctors Without Borders” was made with uncommon access to the group that “provides emergency medical care to populations in distress,” as Hopkins sums it up. “It never occurred to me Doctors Without Borders would be anything less than delighted at my interest,” he writes. “I tried not to let it show on my face when they told me, very politely, I was the twenty-sixth filmmaker to have this bright idea. And as for being embedded with them, I was politely shown the door.” But persistence paid off, and the in-the-trenches portrait of the human part of the humanitarian effort is bracing: this isn’t a fictional narrative that builds to simple uplift nor is it a puff piece for the organization. It’s a portrait of a handful of committed doctors working under the worst of circumstances in Congo and Liberia. (The film was also shot in France, Kenya, Pakistan and Malawi.) I’m still in awe of Geoffrey Smith’s portrait of a single, singular doctor, “The English Surgeon,” which shows a doctor returning again and again to perform brain surgery under fraught conditions in Ukraine. “Living in Emergency” is, of course, more of a mosaic, yet its underlying sentiment is one of hope, even with closing titles that MSF treats ten million patients, but that there are two billion people worldwide without access to medical treatment. HDCam video. 93m. (Ray Pride)