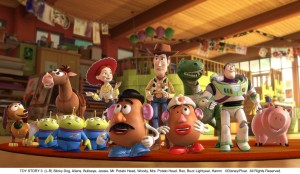 An exponential increase in peril faces a community of toys who talk and walk when  people aren’t around. In 1995, the American boy Andy who owned the toys was only moving to a new house. In 1999, when Andy went off to summer camp, a collectibles dealer preyed upon toys destined for a Tokyo museum. Lee Unkrich directs the third Disney/Pixar G-rated animated adventure, and ratchets up the stakes for toy solidarity and survival. Competing with a Christmas puppy for little Andy’s attention was child’s play compared to 2010’s threats, as 17-year-old Andy (John Morris) heads off to college. The screenplay by Michael Arndt (“Little Miss Sunshine”) never hints that Andy was accepted at the California Institute of the Arts to pursue character-based animation, but “Toy Story 3” delights in reflexive touches. In the first film, the dino Rex reports his origins in “a company that was purchased by Mattel in a leveraged buyout.” Now his buddies rush “to check our price on eBay.” Modernist riffs and references abound in grabs from action, commando, escape, prison, heist and horror films. “Toy Story 3” opens with an insanely baroque action sequence that turns out to be the output of little Andy’s hyper-Hollywood-like imagination. Then another reframing reveals we are watching a home video of Andy playing with his toys. Kids animate their inert pals in their imaginations, rather like animators at Disney/Pixar do with pliant pixels. The toys alive in the film see themselves less as handheld props than the talent who “stay in character” and “do a lot of improv” as their owners make up scenarios. “Toy Story 3” entertains a little more political philosophy than before. The chattel, branded by Andy as his own, realize that, after he abandons them in the attic or his mom tosses them out in the trash, they are emancipated: “We own ourselves,” notes one. “No owner means no heartbreak,” reckons another. Being a plaything no one plays with is no way to be, though. Donated to a daycare facility, the toys arrive like refugees in a foreign land. They deal with toy-on-toy tyranny. Barbie (Jodi Benson) proclaims: “Authority should come from consent of the governed, not from force.” Meanwhile, Ken (Michael Keaton) protests too much: “I’m not a girl’s toy.” In a cliffhanger, the freedom-lovers all hold hands on a conveyor belt at the town incinerator that looks more like a crematorium by J.A. Topf & Söhne. Not to worry. Too many registered trademarks are at stake for an unhappy ending of molten plastic. Teddy Newton, who voices the Fisher-Price, Inc.’s Chatter Telephone character, also directs “Day & Night.” This outstanding short, which screens prior to “Toy Story 3,” matches its title characters as see-through archetypes in dialectical play. With the voices of Tom Hanks, Tim Allen, Joan Cusack, Don Rickles, Wallace Shawn, Estelle Harris, Blake Clark, John Morris, Laurie Metcalf, R. Lee Ermey, Ned Beatty, Bonnie Hunt, Timothy Dalton, Kristen Schaal, Jeff Garlin, Whoopi Goldberg and Pixar lucky charm John Ratzenberger. 98m. (Bill Stamets)