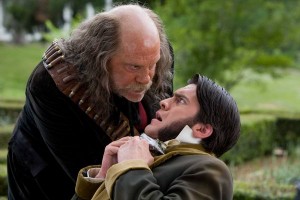 Junky cinematography and CGI make this DC Comics-born crap hard to watch, as if it were badly inked on low-end pulp. Nor does the leaden and rusty metal score by Mastodon and Marco Beltrami do much for the ears. But it’s over in seventy-two minutes, if you skip eight minutes of blurred end credits. The title character (Josh Brolin, “No Country For Old Men”) is a Confederate Army vet who once “disobeyed a direct order” to torch a Union hospital. This prompted his sociopathic commanding officer, Quentin Turnbull (John Malkovich), to torch Hex’s Indian wife and their son, forcing Hex to watch and then branding “Q. T.” on his cheek. All this makes Hex mad as hell. He takes up bounty-hunting so he can get back at bad guys in general. Turns out one in particular did not expire in a later fire–flames are frequent in “Jonah Hex”–and Turnbull is dead-set on terrorizing the country and toppling the government. Find Hex before the 4th of July, when the shit is scheduled to go down. “The President thinks you’re special, even magic,” a White House aide tells Hex. It’s true that the disfigured gunslinger–he harnessed Gatling guns to his horse’s flanks–has some spooky ways of remote-sensing his enemies via corpses, and he shares wisdom with dogs, crows and Crow Indians. After saving the day in D.C. at the first centenary, Hex is offered a full pardon on par with Jack Bauer’s. And a shiny badge. “America needs a sheriff,” says President Grant (Aidan Quinn). “I’m not big on having a boss,” declines Hex, repeating an earlier rationale for siding with the Confederacy against the bossy Union. Hex thinks like Lilah (Megan Fox), his corseted counter-terrorist pal and prostitute: “I ain’t much one for being owned,” she advises a possessive client. Such a wasp-waisted figure hasn’t been seen since Matthew Barney’s “Cremaster 2.” Screenwriters Neveldine & Taylor (“Crank: High Voltage,” “Gamer”) attempt topicality with lines about finding the “trigger mechanism” for a “super-weapon” invented by Eli Whitney, Sr. that’s a “nation-killer.” There are even terrorists wearing vests packed with dynamite. I don’t recall seeing a scene like that in the pre-9/11 “Wild Wild West” (1999), where a Confederate mastermind targets President Grant. But the redundant flashbacks for dummies are no way to extend the running time. Nor does director Jimmy Hayward figure out how to handle the talents of the star of “Hunger” and of “the voice of GMC Trucks.” With Michael Fassbender, Will Arnett, Michael Shannon. 80m. (Bill Stamets)