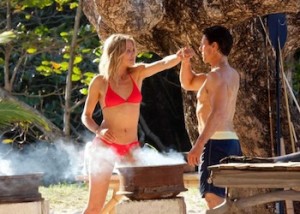 Surely someone on the internet has already given it up for “Knight and Day,” dubbing it “Top Fun!” At the very least, this is splendid, largely unpretentious bunkum that not only winks but intermittently leers at the audience. (But in a good way.) It’s James Mangold’s honorable attempt to emulate the jokey sweep of Hitchcock’s “The Lady Vanishes” as well as location-leaping features like “North by Northwest,” as well as the japery of Peter Stone’s script for “Charade.” (There may be a little bit of “Romancing the Stone” at the bottom of the frappe as well.) The lead characters have 1950s-style names: Cameron Diaz is June Havens to Cruise’s Roy Miller (a name shared by Matt Damon’s character in “Green Zone”). Mangold’s career veers: the man who made the painterly, near-silent “Heavy”; the snake pit of “Girl, Interrupted”; the performance-driven biopic, “Walk the Line” would want to apply the lessons of Hitchcock and Donen to a popcorn meta-movie that also works as not only a satire of already-satirical action movies, but making play with the public image of its superstar? Speaking of whom, he’s the guy, all right, playing “Tom Cruise” playing Tom Cruise playing a simultaneously steely and frantic superman, satirizing his reputation for instability: he plays Roy as if he were James Bond needing to have his hypertension prescription reevaluated. Or, say he’s a one-man “Matrix,” it’s always Bullet Time with Roy. The silliness is superhuman. Then Cruise flashes his pearlies, latches his laser-beam gaze. (Mangold’s directorial credit is cheekily superimposed upon Cruise’s ass.) It works on so many levels when June says to Roy, Diaz to Cruise, a star to a star, “Who are you? Really?” (June is a woman who restores cars who wears brown boots to a bridesmaids’ fitting: sold.) The story is a succession of Macguffins and set-pieces in foreign locations, involving double agents and a battery that will change the world and a phalanx of government spies on his trail (including an extra-mewly Peter Sarsgaard). Roy warns June that the patterned language of the interrogators will be as calibrated as religious indoctrination, which works in the story while prompting a simmering “hmmmmmm.”  There’s lots of absurd action, starting with the crash of a passenger jet that in the real world would cost about the same as a Hollywood summer feature, not including prints and advertising. The most charming directorial trick-and-tic is consistently throwing away CGI stunts in the corner of the frame, as if glanced only in peripheral vision. The effect is usually funny, but also dynamic in an unexpected way. Mangold has a tendency to prettify the frame, for better or worse; I couldn’t judge how bold or saturated “Knight and Day”‘s palette may be from the digital projection at the screening I caught. 110m. Widescreen. (Ray Pride)

[…] This post was mentioned on Twitter by newcity, Ray Pride. Ray Pride said: Picking some of the good bits in KNIGHT & DAY http://bit.ly/9vOiV8 […]