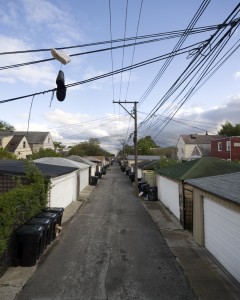 Pickup trucks that weave through alleys and whose beds are filled with old piping, appliances whose days are behind them, any other metals for the taking can be seen throughout Chicago. Filmmakers Ben Kolak, Brian Ashby and Courtney Prokopas immersed themselves in this culture of metal scavenging, and from their time amidst the scraps and the people who search for it, salvaged a distinctly Chicago story.

“Scrappers” will make its world premiere at the Gene Siskel Film Center on June 27 at 4:45pm as part of the seventeenth annual Chicago Underground Film Festival. “Since this was a longitudinal study and we knew we needed to gain a lot of information, we spent six months in the scrap yard talking to people,” says Kolak. The filmmakers, whose first inclination to make a film about scrappers came from seeing the trucks in Hyde Park alleys while at the U of C, then spent another two years filming scavengers, their finds and the sales they made.

The film focuses on two Chicago scrappers—Oscar, an undocmented immigrant from Honduras, and Otis, a South Side native who’s been selling scrap metal for decades. “Our subjects are both family men,” says Ashby, “and what we encountered were not thieves as they’re often portrayed, but honest guys who couldn’t find work or didn’t have papers.” The filmmakers find that the business is as diverse as any, from a scrapper collecting cans in a shopping cart to an operator with dozens of employees who buys scrap from large industrial companies and resells it in large amounts. Oscar and Otis reside somewhere in the middle, clearly good at what they do but dealing with an array of economic, political and family issues.

With the financial collapse of 2008, the scrap-metal market plummeted. What once sold for $300 went for $40 a year later. The film takes up resonating issues like the economic downturn, fatherhood and failed relationships and sees them play out in the men’s homes, the cabs of their trucks and on the grid of Chicago’s alleyways. “We wanted to spend time with the men and build up their trust,” says Kolak. “Rather than having sit-down interviews, we would mount the camera inside their cars and they would do a kind of monologue as they looked for metal.”

With more than two years of filming, the editing process for “Scrappers” came to mirror its subjects’ search for something worth picking up. “This type of cinema relies on editing because there’s no script and [editing] is where the story is created” says Ashby. The film’s score is by Chicago musician Frank Rosaly, who himself often uses scraps as instruments in his percussion creations.

Big fans of Chicago filmmaker Deborah Stratman and students of Chicago’s “rich history of underground cinema,” Ashby says he and Kolak were pleased to make a film that was conceived, shot, edited and scored locally. Following the Sunday premiere, they will be at the Siskel to discuss the film. “Scrappers” will also screen on July 1 at 8pm. (Andrew Rhoades)