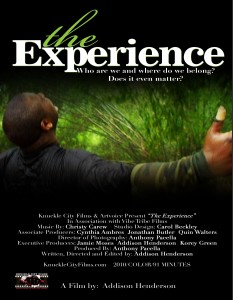 Three summers ago, Buffalo, New York native Addison Henderson went to Ghana with one question: what is identity? He brought with a film crew, his father and three friends to approach topics of identity, belonging and heritage in the West African nation where centuries before the Transatlantic Slave Trade had thrived. Their journey is inspiration for “The Experience,” which will make its Chicago premiere at the Portage Theater on June 23. Henderson, who wrote, directed and edited the film, says he had wanted to make a film about cultural heritage for years. “The project evolved to a film about a journey to Africa to one about identity because I realized that identity is what the journey was really all about,” he says.  Along with his father who is a bishop in Buffalo, Henderson brought fellow filmmaker Corey Green, Alex Gyambrah, who immigrated to the U.S. from Ghana, and Kush Bhardwaj, a professor at Buffalo State.  “I tried to bring together people that represented the entire cultural spectrum of Buffalo,” Henderson says, “which is a mirror of the culture of the entire country.”  The film shows each man’s journey individually, but it also shows a shared human journey about identity and love, a journey that Henderson believes everyone should experience.  Henderson, an actor, filmmaker and science fiction screenwriter, sees the search for identity as an ongoing process that is arduous at times but immensely rewarding. “I wanted to tell a story about people’s lives because we all go through similar things, and when people watch documentary films, they can relate to the stories being told,” he says. The screening at 8pm will be preceded by the chance to meet Henderson and Corey Green at 7pm and followed by a Q&A with the filmmakers as part of the “Know Your Identity Tour.” (Andrew Rhoades)