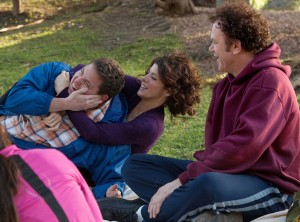 You had me at “Nice penis!”

That’s the first words we and John C. Reilly’s character hear out of the mouth of the ever-beguiling Marisa Tomei in Mark and Jay Duplass’ “Cyrus,” their first film financed by a studio (and executive-produced by Tony Scott and Ridley Scott). John, also the character’s name, is a morose film editor who still hasn’t gotten over a failed marriage from years before, and his ex-wife (Catherine Keener) seems not to be his best friend, but his only friend. The complications that ensue are pretty simple, captured perfectly in the film’s advertising tagline: “John met the woman of his dreams. Then he met her son….”

The 21-year-old son, Cyrus, is played by Jonah Hill, and the possibility of a too-close connection between he and his mother is played for comedy in the highly-improvised movie, done in the fashion of “The Puffy Chair” and “Baghead,” the Duplasses’ earlier features. Hill’s shorn his hair almost to the nub and his staring eyes are often wider than a raccoon’s that’s been foraging behind the local meth lab. “He looks scary in the trailer,” a friend said. “What did you think?” I said something along the lines of “stabby-stabby, killy-killy.” Not so much that his character seems capable of torturing and murdering John, but that the passive-aggressive freakishness he’s enacting is so much more convincing than me wishing the character dead. While a route to loving loverliness between John and Molly doesn’t have to bloom into a perfumed garden path right away, Reilly and Tomei have such charm in their exchanges—he an adept of confusion and consternation, she both mothering yet unaware of her son’s predations—you’d almost like to see them throw the keys of the near-barren apartment Cyrus’ way and have them take a nice sublet in another movie in the theater next door. They’ve done well with the Duplass’ freedoms. Then there’s tubby Cyrus in the kitchen in the middle of the night with a knife, his t-shirt tail barely cuddling his drawers.

“The story itself is fairly conventional, yeah,” Reilly tells me on a Chicago visit. “But I think what makes the film so original and freewheeling is how it’s executed. It’s not some crazy concept of a movie. A woman meets a guy, she already has a son, and the son is jealous of anyone who comes into her life. I’m sure there’s lots of other movies with that same plot, but Mark and Jay are so committed to being honest in their work and not having anything seem corny or canned. I hope it feels like real life to people when they watch it.”

And that’s what makes the movie so squirmy even when it’s very funny. Reilly’s wife is an independent film producer and had met the brothers on the film festival circuit and had seen “The Puffy Chair.” “All the indications were that the way they liked to work—you could see it in their movies, that they liked to improvise a lot, they have a commitment to being honest with it. Then when I met them, they said, ‘We wrote this script for you, and if you don’t want to do it, we aren’t going to do this movie.'”

That’s a small amount of responsibility, “Yeah, and also it just makes you realize, these people mean business! They’re not just ambitious filmmakers, they have this vision; they see me as this character. A lot of great movies that I’ve done have come from similar situations, where I’m told, ‘You’re it! It’s the only way it can be!’ As opposed to, ‘Are you going to play this part? No? We’ll go to so-and-so and so-and-so but we’re going to get this movie made.'”

“Cyrus” is a movie of close-ups and sudden snap zooms, which leads Hill to readily steal scenes. There may have been shots where he blinked, but they’re few and far between. “I may not have caught a glimpse of anything,” Reilly says of the intentionally ragged visual style. “I didn’t see any photographs and I didn’t see any playback. I’m able to be objective with my work and look at stuff. I’ve done movies where I’ve seen the dailies, but I decided, you know what, it’s so raw and so emotional, I don’t want to have anything… I just want it to feel like life when I show up in the morning. A lot of the clothes I’m wearing in the movie are my own clothes from home. A lot of the interactions are my honest take on how I would deal with the situation rather than have it filtered through the character. It’s really how I would have reacted if I were in those situations.”

In Albert Brooks’ 1981 “Modern Romance,” Brooks also plays a film editor flummoxed by romance. That could be the name of “Cyrus” as well. It’s… complicated. “I think we’re at a place now because of things like Facebook and the speed at which we’re communicating, I think people see through artifice more than ever. Y’know?” he says. “With YouTube and videos and the appeal of reality shows even though a lot of that is bullshit. I think we’ve just become a very savvy, documentary-centric [society]. There is so much media out there that people can tell the difference between something manufactured and something that just happened and I think Mark and Jay are part of that generation, and that’s why they insist on as much organic development in the characters as they do.”