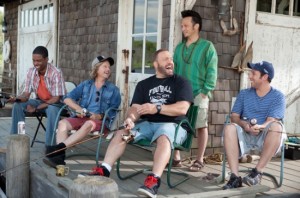 In 1978, the score was 30-31 and Lenny’s last shot won the basketball game. Thirty years later the coach’s only championship team gathers for his funeral. Lenny (Adam Sandler) rents a lake house for his four teammates and their families. They disperse coach’s ashes and raise a flag on the Fourth of July. Sandler and Fred Wolf write a tender comedy about five pals teasing one another and treasuring pal-dom. Everyone is a joker and a good sport. The gross-out gags about body parts and bodily functions are arguably gentler than might be expected. Sandler may let down fans of his unmanaged anger, but admirers of his family values get a lot to admire in this PG-13-rated propaganda for playing outdoors. We first meet grown up Lenny in Beverly Hills, blustering on his cell phone, “I’m the biggest agent in Hollywood!” as his boys decapitate targets in a video game and text-message the nanny to serve them imported bottled water. He tries to interest them in Chutes and Ladders. They point out Spielberg’s kids have a 150-inch screen. At the lake house in New England, Lenny watches one son pick up a stone and is saddened that he has no idea how to skip it across the water. Dad, though, is later thrilled to discover kids repurposing Dunkin Donuts cups from product-placement duty to old-fashioned playthings. “Grown Ups” extols all sorts of recreation not based on screens like the ones where it will appear. Happy Madison house director Dennis Dugan (“Big Daddy,” “Happy Gilmore,” “You Don’t Mess With The Zohan,” “I Now Pronounce You Chuck & Larry”) guides the gags in Essex, Massachusetts. With Kevin James, Chris Rock, David Spade, Rob Schneider, Salma Hayek, Maria Bello, Maya Rudolph. 102m. (Bill Stamets)