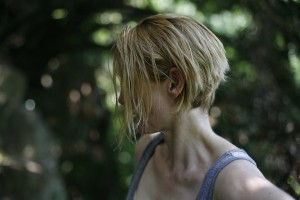 As Milan is dusted with late winter snow, the first pulsations of music under the credits of Sicilian director Luca Guadagnino’s sumptuous, scrumptious “I Am Love” (Io Sono L’Amore)—a passage from “Nixon in China,” like the rest of the score from John Adams’ back catalogue of operas (ransacked profitably as Michael Nyman’s was for “Man on Wire”)—you cannot but sigh at a melodramatic confidence that would be nothing more than arrogance and swagger if it were not so generous in its visual and aural delights. The atmospheric European art film lives. Shot in Italian, it’s a decade-long project for the director and Tilda Swinton.  A generational story of a wealthy Russian family with textiles woven into their history, transplanted to Italy, has evoked comparisons to Visconti’s late, magisterial examinations of his own class, but I swoon to a velocity and lush texture that suggests the style of Bernardo Bertolucci’s “The Conformist” or late Douglas Sirk, with a tincture of Antoni-ennui. (He’s a greedy and knowing student.) The film itself teases allusions to Visconti’s “The Leopard,” while Swinton and Guadagnino describe the film as “sense-ational” and “Visconti on acid.” As for the porcelain Swinton, who is photogenic even when hoping not to be? All is Tilda, Tilda, Tilda. “I Am Love” is a director-as-God-who-likes-to-decorate movie, to the good, as we move from restaurants and formal dinners to intergenerational affairs. Fabrics drape. Looms weave. Patterns furl. The camera swirls, tracking, eddying, high-hatting. The flow is soothing, but also ominous. Food takes its place at the table: voluptuous, sensual, even sexual. Liqueurs lit from beneath. Traditional fish stew. And Swinton has her sweet way with a perfectly plated prawn. It’s a visual feast. Suffocating beauty: Sì, Maestro, grazie, posso avere di più? Thank you, may we have some more? With Gabriele Ferzetti, Marisa Berenson, Pippo Delbono. 119m. (Ray Pride)

“I Am Love” opens Friday at Landmark Century.