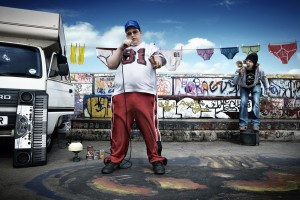 “Lets go make music-fucking history!” roadie Le Donk (Paddy Considine) says at the start of Shane Meadows’ sweetly, engagingly silly, largely improvised, shot-in-five-days music-scene mock-doc “Le Donk and Scor-zay-zee.” It’s a manifesto on shooting a feature  in five days for just £30,000, but also a lark with a dark heart: “Spinal Tap” meets the Angry Young Men. Considine is paired with real life Nottingham rapper Dean Palinczuk as Scor-zay-zee, a young “talent” he’s certain he can make into the star he almost was fifteen years ago. Meadows’ filmography includes other comedies, but he’s best known for his accomplished dramas set in the Midlands of Britain, including the boxing tale “Twentyfour Seven” (1997) with Bob Hoskins, the scalding “Dead Man’s Shoes” (2004) (also starring the mercurial, compelling Considine), the excellent coming-of-age “This is England” (2006), set during the Falklands War, and the tender miniature “Somers Town” (2008), shot in eleven days. But there’s always a sense of fun somewhere in even the deepest funks of his films, and he lets that lope throughout “Le Donk.” (Meadows captures the spirit of invective, both as catharsis and as performance, very, very well.) And Considine, as always, breathes a convincing character, even amid the detritus of mockumentary scaffolding. (And he doesn’t carry that awful odor of disreputability that is  Steve Coogan’s taint of choice.) Meadows amuses as the doc-maker named “Shane Meadows.” With The Arctic Monkeys, Olivia Colman, Richard Graham, Seamus O’Neill. 75m. (Ray Pride)