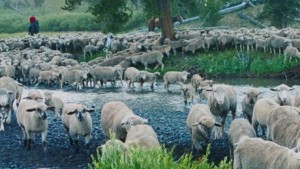 Lucien Castaing-Taylor and Ilisa Barbash’s austere “Sweetgrass” follows a team of modern-day Montana cowboys as they shepherd their flock 200 miles into the Beartooth Mountains for summer pasture. Patient, tactile and rapturously beautiful, you can almost smell the chlorophyll, the air, the manure, the lamb rejected at birth by its mother. The film is so cannily descriptive, it’s difficult to describe without falling into forced epiphany or staccato poetry. So the temptation to note parallel filmmaking: Castaing-Taylor’s gorgeous cinematography suggests Terrence Malick, while the long takes of staring, chewing, shearing, the undulation of flocks, suggests the patient Hungarians, Béla Tarr and Miklós Janscó. The unblinking gaze suggests Nikolaus Geyrhalter (“Our Daily Bread,” 2005) and his way of observing agricultural process. There is an allusion in title and form to one predecessor: in 1925, Merian C. Cooper and Ernest B. Schoedsack made “Grass,” a documentary about Persian sheepherders. “Sweetgrass” is observational, after the Frederick Wiseman school of direct cinema, but mostly it is a feat of attaining sensation, on a ranch that has since been sold.  Sound matters: wind, the jounce of bells, the crisp crunch of chewing, chewing, chewing the cowboys’ spirited profanity. It’s dreamy. It’s also over. “Sweetgrass” was shot in 2001-2003, and this would turn out to be the last drive.  The filmmakers are married Harvard anthropologists: you wouldn’t expect this movie at all, let alone that it is such a superbly edited feat of contemplation.  105m.  (Ray Pride)