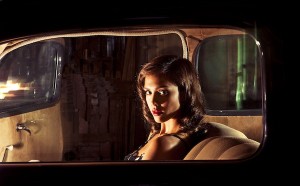 “The only decent-looking guy I’ve seen in this stinkhole, and he’s a boy scout with a badge!” Jim Thompson’s dialogue lands with the precision of a knife-thrower’s aim. His way with internal monologue is as infernal as they come: “His son had beaten a whore to death, and she’d killed him, and he’d never been able to live it down. Not if he lived to be a 100, and I damn well hopes he would.” In novels like “Pop. 1280” and “A Swell-Looking Dame,” Thompson supped long at the well of the criminal mind. In mid-twentieth-century, he wrote novels of chilly, inspired misanthropy. Stanley Kubrick, who co-wrote “The Killing” and “Paths of Glory” with Thompson, called “The Killer Inside Me,” published in 1952, “possibly the most chilling and believable first-person story of a criminally warped mind I have ever encountered.” In Michael Winterbottom’s adaptation, written by John Curran (“We Don’t Live Here Anymore”), the protean and impatient director’s seventeenth completed feature establishes a parched tone different from Bertrand Tavernier’s 1981 “Coup de Torchon.” The French director played a sociopath lawman’s murders from “Pop. 1280” for existential comedy. In Winterbottom’s 1958 Central City, Texas, Casey Affleck plays sheriff’s deputy Lou Ford, narrating from a mind full-to-bursting with a single calm, rationalizing voice. The script draws directly from the book, with lines like “Out here you’re a man, and a gentleman, or y’aren’t anything at all. And god help you if you’re not.” While he has a long-term girlfriend (Kate Hudson), he’s immediately drawn to a prostitute (Jessica Alba) that the local powers-that-be have told him to run out of town. Handsome, calm, Lou is a simple man. A serious man. A single man. A mad man. He looks in a mirror and we sense only fathomless shallows. Like a proper Englishman, Winterbottom portrays the play, the spanking, the physicality between Lou and his two lovers, as the gateway to dark things. Sick souls with the good misfortune to find one another? Most commentary since the film’s Sundance and Berlin showings has been about its sustained scenes of violence toward women: the camera does not look away. Horror? Terror? No, murder.  The wide-screen images of the small town have an idyllic ordinariness. The men are sweaty connivers. A victim has one question that does not even rise to inflection. “Why… Why… Why…” There is no why. There is no “sorry.” There is no love. “I love you” is what a killer says, pulling the knife out again and again. This is but one director’s view of Jim Thompson’s immaculately crafted pulp planet. Cinematographer Marcel Zyskind’s camera rides behind Lou, or more precisely, it’s the devil perched on his shoulder, making the audience tacitly complicit in his cold, inexplicable acts. While unconvincing in some choices, such as acts of violence involving male victims occurring off-screen, Thompson’s dry, mirthless chuckle resounds throughout Winterbottom’s try at termite operetta. 109m. Widescreen. (Ray Pride)

“The Killer Inside Me” opens Friday at the Music Box.