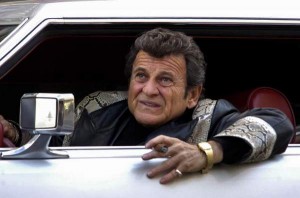 “Selling love will make you rich,” explains Grace Bontempo (Helen Mirren, “The Queen”) in a “Love Ranch” voiceover. “That’s what my mother taught me. Just don’t put your heart in it.” Running the Love Ranch, a legal brothel in Nevada in the 1970s, Grace and husband Charlie (Joe Pesci, “Casino”) resemble Joe and Sally Conforte, who once ran the Mustang Ranch. Armando Bruza (Sergio Peris-Mencheta) is an Argentine heavyweight boxer on the skids who steps into the couple’s business and marriage, just as the real Oscar Bonavena did. Taylor Hackford (“Ray”) directs a script by Mark Jacobson, whose earlier New York Magazine article inspired “American Gangster.” The original Confortes were profiled by Look magazine in 1971 and Rolling Stone the next year. “Love Ranch” is variously identified as “a fictional story” and “inspired by a true story.” Beginning and ending with Grace toasting her “girls,” this semi-engaging saga is structured as a long flashback to 1976. Her life story is worthy of a Small Business Administration salute. Soap-opera-like lines include “I didn’t take your wife; you lost her.” Among the melodramatic touches are a bout with cancer and an experimental radiation cure in prison. In his very broken English, Armando boasts: “In my country I’m more known than any fucking Beatles.” Archival news footage from Buenos Aires may back up that claim, but his boxing scenes are unlike any other ring action I’ve seen on the screen. Meanwhile, back at the ranch, there’s very little nitty-gritty evidence of how Grace earns her bucks or keeps her books. With Gina Gershon, Gil Birmingham, Scout Taylor-Compton, Niki Crawford, MC Gainey, Bai Ling, Rick Gomez, Raoul Trujillo. 117m. (Bill Stamets)