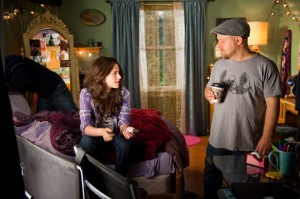 Niche, niche, niche. “Eclipse,” the third in the “Twilight” tetralogy of pre-teen-to-teen abstinence parables from the novels by Stephenie Meyer (eventually to be a film pentalogy), has heightened production values courtesy of music-video-teethed director David Slade (“Hard Candy,” “30 Days Of Night, ” right)—a man who’s never met a digital intermediate he didn’t like—but it’s alien territory for anyone not already an admirer or adept of the series’ peculiar, bloodless vampirism in the service of dubious subtext. I’m trying to remember if I’ve ever walked in on anyone masturbating, witnessing suddenly wide eyes flicking up to reveal brow furrowed, gashed, in private distant transport. Many moments in “T:E” made me feel that way, as if I had walked into a secretly thrumming circle of private fetishes. I’m not entirely sure I want to fathom what emotional satisfactions the core “Twilight” audience gathers. Amid the indifferently paced set-pieces, soundtrack alternating between loud music and the sound of cricket and frog-crazed nights, drawing on a huge, chatty cast, here’s the lessons I take away: Fuck and you’re dead. Fuck before marriage, you’re dead.

It’s the teeny town of Forks, Washington—take the wrong fork, you’re Forked. “Marriage is forever,” at least if you’ve “changed.” Remember, too, Forks is “Home of the Spartans.” Anything in the service of enough subtext to make you go blind. The filmmakers cut fleetly around inadequate performances, notably Taylor Lautner’s as the marble-mouthed, shirtless, snub-nosed werewolf twinkie-bot. (“Does he own a shirt?” is knowingly asked, to scattered titters.) Reverse angles as Robert Pattinson and Kristen Stewart converse genteelly are a duel of exquisitely manicured eyebrows, the passive brat matching the louche proclamations (but not demonstrations) of passion from the milky vamp. It’s the opposite of the “Matrix” movies, which, in sequels, celebrated unbridled fucking as salvation from the everyday. The abstinence-heavy content of the hyper-tooled romantic melodrama, drawn from the Mormon novelist’s work, could as well be called “Romancing The Cock-Tease.” Why do vampires and werewolves alike pant after the diva Bella? It’s on the page, son, it’s on the page. Move along. One of the conceptual marvels behind the bristling ranks of minor figures and repeated recitations of haphazard backstory is how these subsets of the larger story can appeal differently to multiple factions of the films’ following. Everyone’s his or her own walking thesaurus of personal reference, of individual neediness and that little feller over there is their own spark of emotional hypertext. Speaking of walking: the young woman beside me whose eyes were slightly teary, who kept biting her hand at any Pattinson-Stewart fuck-me-won’t-fuck-you threw it in before the movie was done. “She’s such a c—,” she said to her friend. They consult, rise, exit thirty minutes before it’s over. The K-Stew fan club, minus two. “She’s such a c—,” she mutters, shuffling across legs, feet. Drama! At last!

Best bad line: “Paul’s been hovering the grub but I saved you some burgers.” Best line: “I punched a werewolf in the face.”

Slumming will be had: the score by composer Howard Shore (following Carter Burwell and Alexandre Desplat) inserts itself at fleeting moments amid the blancmange of post-anthemic mid-emo sludgepop to lift resounding twangs from unlikely places such as Pat Metheny’s guitar glissandos on Steve Reich’s “Different Trains,” and little buzzy passages that suggest keen listening to Glenn Branca and Rhys Chatham.