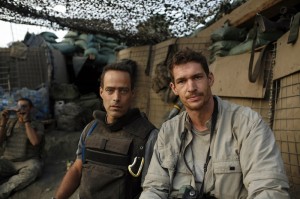 On assignment for Vanity Fair, journalist Sebastian Junger and photographer Tim Hetherington [pictured] traveled ten times to document the fifteen-month duration of the deployment of soldiers of the Second Platoon at an outpost in remotest Afghanistan, in the Korengal Valley. Financing their effort themselves, the co-directors returned home with 150 hours of footage, and the “Restrepo” is the result.

It’s a war movie, but it’s immersive: we’re embedded with the soldiers and witness what they experience. “Hearts and minds,” a soldier mutters: “Restrepo” commands both when you watch this remarkable documentary. “The movie’s interesting, it’s kind of a hybrid,” Junger tells me. “It has the dramatic structure of a Hollywood war movie, I mean, it’s not didactic, it’s not informative, it’s not ‘about’ Afghanistan. It’s an experience, the way dramatic features are an experience. You enter that world for ninety minutes, and then you leave that world. But it’s about a topic of national concern, so I think it has the best of both, in terms of commercial potential, it has this theatrical drama but it’s real. I think it has a very good chance of people going to see it, I don’t want to use the word ‘entertainment,’ but as an emotional experience rather than a learning experience.”

It’s experiential rather than contextualizing, which accounts for its power, but some have criticized its grunts-on-the-ground perspective. “The fact is, there’s an enormous amount of journalistic material that covers those important issues, the context,” Junger counters. “Do people really want to see another movie that tells them what they already believe about the war? If we had done that, I think all these people that are criticizing us for doing it, wouldn’t have gone to see that movie.”

Junger identifies himself as a journalist rather than a filmmaker. “I didn’t have a tape recorder out there. I had a notebook,” he says of his methods. “I used the notebook during scenes that would have not been good to film. Conversations in the dark. Things like that. Then there are other scenes that are perfect to film and you never write them down in a notebook. No one takes notes during a firefight. It’s ludicrous. I tried to divide those tasks up according to the kind of scene it was and then I referred to the video continually while writing my book (“War”) and in making the movie, I referred to my notes, just in terms of narrative and context and storyline. They complemented each other really well.”

“The plot, the, quote, ‘plot,’ was nonexistent. They were marking time in a very dangerous place. They weren’t moving forward to take Baghdad, they weren’t storming the beaches at Normandy,” he says. “They were in a static position, pretty much doing the same thing over and over again. In terms of plot, that wasn’t really where the center of gravity of the film was. It was really more the emotional development, the emotional experience of these soldiers.”

Hetherington has said he thought of himself and Junger as ‘sergeants of journalism,’ that they’d seen much more battle than the young soldiers. “That’s a good quote, I didn’t hear that,” Junger says, laughing. “They were young guys, they were 19, 20, they were new in the world. I found myself sometimes talking to them about life decisions that they were making and I realized that I was much more skilled at evaluating those kinds of questions than they were because I was much older. They were very, very well-trained as soldiers, and they had huge bodies of knowledge that I didn’t have. In terms of combat experience, they [assume] civilians haven’t been in combat; they were actually kind of shocked to realize, oh, these guys were actually in a lot of combat. It just wasn’t with us.”

Implicit throughout are the forging and maintenance of bonds of brotherhood. “That was our sort of guiding principle in the edit room, and in the shooting. We didn’t want anything in the movie that was outside of the soldiers’ experience. So we could not—we thought about it—but we did not arrange for an interview with a general, and ask him to explain why U. S. forces are in the Korengal Valley. Soldiers cannot ask generals that question. We did not have an outside narrator because there is no narrator in the Korengal. Literally. There is no voice explaining things from the heavens. The other guiding principle was that watching the movie had to elicit the same emotions as being out there did. Very quickly, false notes, dead ends that we tried, scenes that we thought would be cute or funny or interesting, we would try them, and they just wouldn’t work. They rang false a little bit. Those were two principles we held to.”

“Restrepo” opens Friday at Pipers. Ray Pride’s video of Junger’s comments on the Gen. McChrystal situtation is below.