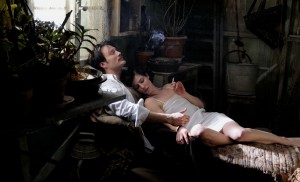 Like Helen Mirren playing a Nevada brothel proprietor in “Love Ranch” (also opening this week), Anna Mouglalis plays a female entrepreneur, in this case, of Paris haute couture, in “Coco Chanel & Igor Stravinsky.” Despite their cultural differences, both of these businesswomen are portrayed as romantic casualties. Neither childless careerist is allowed more than an interlude of true love. Chris Greenhalgh adapts his 2002 novel “Coco & Igor” for a classy screenplay that starts in 1913 Paris, which is after the main time frame of “Coco Before Chanel” (2009) in which Audrey Tautou starred. Here Coco Chanel is played by Mouglalis, a one-time Chanel model who’s also had a role as Simone de Beauvoir. Seven years after the storied, tumultuous premiere of “The Rite of Spring,” she becomes a patron of Igor Stravinsky (Mads Mikkelsen, “After The Wedding,” “Casino Royale”), relocating the Russian expat, his consumptive wife and their four children to her deluxe villa. The passionate affair of these modernist icons is punctuated by such testy exchanges as: “I’m more successful,” Coco claims. “You’re a shopkeeper,” Igor snaps. Director Jan Kounen (“Dobermann,” “Darshan, The Embrace”) co-writes this detailed appreciation of style in music, clothing and sexual manners. Dissonance and elegance are ways of life for these radical artistes. 115m. (Bill Stamets)