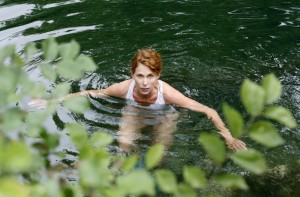 The damp French countryside is the setting of “Let It Rain” (Parlez-moi de la pluie, or “Talk to Me Of The Rain”), the latest pleasing dramatic comedy by writer-director-actor Agnès Jaoui (“The Taste of Others”). For her third feature, she’s working once more with her writer-actor partner Jean-Pierre Bacri. Jaoui plays a feminist novelist-politician named Agathe Villanova (punningly, “New City”) who returns to her childhood home in the south of France to run for election. The son of her late mother’s Algerian housekeeper (Jamel Debbouze, “Days of Glory”) asks her to be in a documentary about “strong women” he’s making with failed reporter Michel (Bacri). The joke is how foolish he can be, how disastrous his instincts are; you cannot but laugh at a line like “Just because you’re a woman doesn’t mean you can’t cry.” (Earlier, he’s answered his small son, “What’s a feminist?” with “A woman who’s always making demands.”) While not in a league with her rich debut, “The Taste of Others” (2000), a small marvel of gentle construction—few recent films are—”Let It Rain” still makes funny, resonant play with the role of modern men, especially in French society, and the permutations of love, in whatever society. The other story strands are familiar: infidelity; a return to a childhood country home; the emotional tug of old, familiar ballads; ingrained prejudice; cross-generational loyalty. While all topics from the most earnest artifacts of French cinema, they weave gently to form an admirably offhanded example of emotional-dramatic fabric. Jaoui’s work has affinities with the better work of Woody Allen—think “Crimes and Misdemeanors”—but is tenderer in the face of mortification and mortality. The rain comes, the rain parts, the sun shines once more on us all. 99m. (Ray Pride)

“Let It Rain” opens Friday at the Music Box.