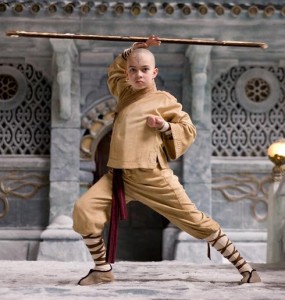 Three seasons of Nickelodeon’s “Avatar: The Last Airbender” spawned three video games, and now M. Night Shyamalan (“The Happening,” “The Sixth Sense”) produces, writes and directs a 3-D live-action fantasy film based on the animated  series. Kids resist a genocidal, religion-intolerant tyrant to renew global harmony through spiritual healing, with an assist from a princess committing suicide. Adapting his three daughters’ favorite TV show, Shyamalan abandons his signature metaphysical terrors for pre-adolescent adventures. On a polytheistic monolingual planet, there are four nations named after four elements. Exceptional individuals in each nation can bend their respective element using telekinetic chi. These benders display little artistry bending air, water, fire and earth, primarily for military purposes. One bender is more exceptional than all others since he can bend all four elements. And he is the only intermediary with the gods. All tribes bow to this exalted one known as Avatar, reincarnated now as Aang (Noah Ringer), the last in a nearly exterminated line of Airbenders. But there’s injustice and imbalance due to evil designs of the Fire Nation. These mean imperialists dress in black and command soot-belching metal warships. Will that bald boy with a glowing downward-pointing arrow on his forehead emerge from a century-old iceberg and lead a popular front of the faithful to achieve a Grand Unified Theory of the four elements for geopolitical Gaia? Spoiler alert: yes. Even though “The Last Airbender” was partly shot in Greenland, the dim smear of CGI disguises any trace of that landscape. The 3-D is mostly used to float place names such as “Northern Earth Kingdom” and “Southern Water Tribe” somewhere over the heads of audience members ten rows in front of you. Character-bending and mind-bending are not happening anywhere. With Dev Patel, Jackson Rathbone, Nicola Peltz, Cliff Curtis, Shaun Toub, Aasif Mandvi. 103m. (Bill Stamets)