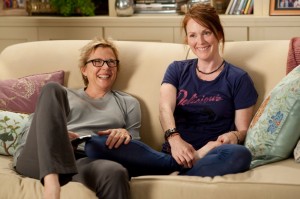 When Monty Python sang “Every sperm is sacred” a couple decades ago, they couldn’t have predicted Lisa Cholodenko’s alternately sparkling and acid comedy of twenty-first century middle-class manners.

Following “Laurel Canyon” after a gap of eight years, for “The Kids Are All Right,” her third, exceptionally funny and frank feature, Cholodenko wanted to make a film that was brisker, buzzier, full of clashing characters and bristling actors: less art-house than your house and my house. While the couple at the center is lesbian, the story is about intimacy and boundaries, how families breathe and grow. Nic (Annette Bening) and Jules (Julianne Moore) make a cozy long-term Los Angeleno couple. Nic is a doctor, blunt, controlling, fond of her wine, given to socially inappropriate confessions and insights. Jules is dreamier, just starting a new business, as a landscape architect. Life is good, with much of the cast often dressed in T-shirts that add sly asides to scenes. Both their daughter, Joni (Mia Wasikowska, “Alice in Wonderland”) is about to go to college, and their younger son, Laser (Josh Hutcherson), are adjusted to their unique family circumstances—do any of us really know any others than those we’re in?—but now that Joni (yes, named after Joni Mitchell) is turning 18, she could ask who her father is. Laser wants to know: what’s the man like who gave sperm for both their births? Enter Paul (Mark Ruffalo), a motorcycle-riding restaurateur whose prototypical L.A. side-street oasis of a café, we glimpse once or twice, is named “WYSIWYG.”

No, not exactly. What you get in “The Kids Are All Right” is much more than that simple outline. It’s chock-a-block with bittersweet privileged moments (plus swearing and sex). The actors seem like they’ve been given permission to live these characters. It’s down to subtle body language. How did Paul get to the first meeting with the kids? “I took my motorcycle so I just weaved through it”: Ruffalo drowsy-drawls it, and we know him in a dimpling twinkle. And the woman he’s seeing, a hostess at the restaurant says later, “It was cute seeing you in Dad mode, it made me want to fuck you.”

After the moms meet Paul, drama begets comedy. Paul hires Nic to create a garden in his untended backyard: a quiet yet bold reminder that the missing not-father may well be a snake in this particular Eden. “The Kids Are All Right” is both neatly structured and has a lived-in quality, a rare feeling in any American comedy nowadays. But the details sing: there’s a medium shot on Moore in a kitchen scene. Something’s going on, she’s been condescended to, but all the things that play across her face indicate her choice to stay quiet. It even comes down to how Wasikowska refolds her legs in one scene. There are waves of texture. But the forefront is characters and the comedy.

“There are certain things that I know are a little bit primordial rather than knowing exactly why I’m doing something,” Cholodenko tells me about the years she and Stuart Blumberg (“Keeping the Faith,” “The Girl Next Door”) worked on the script. “I knew with this film and with these characters, I wanted to keep digging deeper into their psyches and their issues and their moment until they felt like they were truly three-dimensional to me. So that was a very critical drive. I think when you get to that place with characters, then you can pull off spontaneous moments and they feel authentic to the characters. It’s like, whoa, that was totally from left field, but that made sense. Something surprising but inevitable.”

“The Kids” is distributed by Focus Features, headed by writer-producer-distributor James Schamus, who, after its post-Sundance acquistion, called the movie “the best in American independent film making,” and noted in an interview that Cholodenko was a student of his at Columbia University, “but I didn’t teach her one possible thing that could have led to this movie.”

Cholodenko smiles, thinks. “His classes were, like, semiotics! I don’t remember exactly what he taught me. No-budget filmmaking, maybe, I took with him. James represented something very specific to me. He’s an incredibly bright person and he did a lot of good thinking about independent filmmaking at a certain time, and that’s when I was in graduate school. He often said, ‘Make the budget your esthetic.’ That’s a great line. He and Christine Vachon would say that to their filmmakers when they were making movies for two cents. When I got word that they wanted me to make [“Kids”] for a certain amount of money and a certain amount of time, I was pissed. I was just like… I’ve worked so long and so hard on this script and now it’s going to be… I don’t want to squander this great script. It was very unsettling, it was very nerve-wracking. I remembered that [advice], I talked to my agent, it was like, ‘Step up, you’ve got to do something inventive with it because a lot of people wouldn’t mind having what you have.'”

“The Kids Are All Right” opens Friday at Landmark Century.