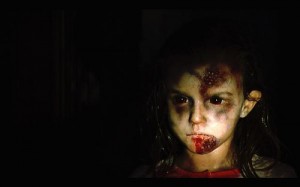 Sequel-making at its best, Spanish chiller “[REC] 2” picks up fifteen minutes after the end of its 2007 predecessor and hurtles headlong from the start. The setting’s the same, a quarantined building where the virus-ridden tenants-turned-zombies first had their way with TV reporters who were following a fire brigade. Now the point-of-view switches to four members of a SWAT team with cameras and the requisite government scientist. Again directed by the team of Jaume Balagueró and Paco Plaza, the bursts of violence are mostly inspired, the claustrophobia of the gorgeously dark, grim spaces intense and, with its increasing turns to the supernatural, it would not be hyperbole to think of “[REC] 2” as a manic remake of, or at least satisfying variation on “The Exorcist.” “Paranormal Activity 2,” consider your ass pre-kicked. “[REC] 2″‘s opening line kicks the proceedings off properly (in Spanish): “Record it all, motherfucker!” And the last shot? The most disgusting thing I’ve seen in months that didn’t involve politics. Keep your eyes open, at least most of the time. With Manuela Velasco,  Javier Botet, Ferran Terraza, David Vert, Alejandro Casaseca, Ana Isabel Velásquez, Andrea Ros, Juli Fàbregas. 85m. (Ray Pride)

“[REC] 2” opens Friday at the Music Box. Trailer is below.