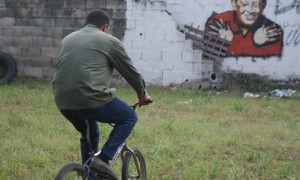 “South America is the continent where an essentially social-democratic alternative to neo-liberal capitalism is rising from below and infecting politics everywhere,” writes Tariq Ali in his book “Pirates of the Caribbean: Axis of Hope.” That’s the op-ed notion of note in Oliver Stone’s “South of the Border,” a ragged documentary co-scripted by Ali, whose print outlets began with Black Dwarf and Red Mole and now include the New Left Review. Unlike Gene Autry’s adventurism in 1939’s “South of the Border,” Stone’s early 2009 visit to Latin America rallies anti-imperialist tendencies. “American imperialism has always been the imperialism that has been frightened of speaking its name,” Ali told The Progressive in 2001. (He later told Z Magazine that the American empire feared a future united bloc of Japan, China and the two Koreas.) In “South of the Border” Stone interviews presidents of five countries, starting with Hugo Chavez of Venezuela. He likes them, he really likes all of them. “You look in their eyes,” he told George Stephanopoulos on ABC- TV. “These are good people.” Stone mocks Fox News for its slant, just as Ali attacks “reptilian journalists,” “imperial blowhards” and “bandwagon careerists” in “Pirates of the Caribbean.” Yet his alternative is a pal-style reportage. “You go to sleep reading this book?” he teases Chavez, by holding up a policy tome. Later he gets him to ride a kid’s bike so he can direct a re-enactment of a scene from the leader’s boyhood. Stone asks President Evo Morales of Bolivia to join him chewing coca leaves. Touring the private rooms of Argentina’s president, he asks her how many shoes she owns. “You are a very gentle man,” he informs Paraguay’s president, cued to a close-up of a warm handshake. Speaking of shaking hands, “South of the Border” shares the jittery handheld shooting style of Stone’s “Comandante” (2003), his chaotically edited documentary on Fidel Castro that suffered from assorted boundary issues. Both films show interviews and outings with wide-angled framings of entourages and other camera people. No less obnoxious is the overblown score by Adam Peters (“Disinfo Nation” and “Da Vinci Code Decoded”). If you can tune out Stone, it’s worth it to meet these talking heads of state and deal with Tariq’s big picture of Bolivar versus global capital. 78m. (Bill Stamets)

“South of the Border” opens Friday at ShowPlace ICON at Roosevelt Collection.