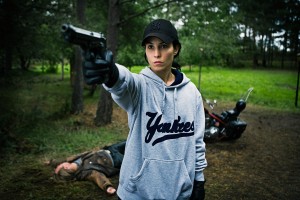 If Pippi Longstocking were flesh-and-blood and modern and an uncommonly pissed-off 26-year-old, what would her dark night dreams consist of? The answer’s opening around the country this week, starring one of the most memorable of twenty-first-century fairytale characters, built for our Age of Terror. A lurid, satisfying surprise, “The Girl Who Played With Fire” works on a different scale and in a different dramatic key than “The Girl With The Dragon Tattoo.” Made on a noticeably lower budget than its predecessor and originally intended for Scandinavian and German television, “Played With Fire,” directed by Daniel Alfredson (brother of “Let the Right One In”‘s Tomas Alfredson), begins with two virtuous elements: diminutive powerhouse Lisbeth Salander and the woman who plays her, Noomi Rapace. There’s a genuine extra-diegetic thrill to the conception of the character, however the films are executed. There’s a refrain throughout Stieg Larsson’s Millennium trilogy where the small angry polymath murmurs about someone who gets in her way, especially journalist Mikael Blomkvist (Michael Nyqvist): “Mikael fucking Blomkvist.” Always “fucking” in the middle. In its diminution of range, “Played” thrives from the notion of “Lisbeth fucking Salander,” this wasp-small power-pixie who rises above her mistreatment by powerful men and random men in Swedish society, above her station, about her five feet, her ninety pounds. She’s “invincible,” as the subtitles have it. Screenwriter Jonas Frykberg’s condensation of plot involves some absurd coincidences that amount to dexterous compression; readers of the book should also appreciate the absence of several less-than-meaty subplots, especially about politics in Swedish journalism. Alfredson’s blocking tends to TV-scaled gestures with lots of momentous coffee slurping and slugging of espresso, working with more dispatch than subtlety. He’s gone from the earlier film’s grandiose pop to grittier pulp. Still, there are small, telling details, as when Salander’s put a kitchen together from fresh-bought IKEA, contemplating the saddle of a kitchen stool like a small, lasting masterpiece. And while the generic ringtone of phones from Nokia, listed in the end credits, may not have been meant as a joke, it becomes one, an insistent refrain troubling characters too busy to bother with custom chirp. And of course Mikael Blomkvist would take notes in a trim pocket Moleskine notebook. (A single bottle of Bombay Sapphire turns up in several scenes like a set dresser’s small revenge; more amusing than distracting.) The plot, simplified from the novel, includes human trafficking from Russia and the former Soviet bloc, and briefly threatens to turn into “Lisbeth 4Ever,” which, fortunately, Alfredson is too impatient to rest upon. Salander is a survivor figure (unlike Larsson), despite the potential for violence that awaits her at every turn. The swirl around Larsson’s estate remains contentious. Aside from David Fincher’s remake (adapted by Steven Zaillian), there’s rumoring of half a fourth manuscript, maybe an outline for a total of ten books, maybe his life partner, telling her side in a book this fall, knows more than she’s letting on in the face of his father’s and brother’s tending of the estate. It’s all another convoluted drama, but I’d be weirdly gratified to see the credit at the end of a movie every year, “Lisbeth Salander Will Return In The Girl Who Took Your Measure.” (One more design footnote: it took a moment to realize the typeface that looks gorgeous on several Swedish post office boxes; meta sans, the font you’re reading now, if you’re reading in print.) With Annika Hallin, Per Oscarsson, Lena Endre, Peter Andersson. 129m. (Ray Pride)

“The Girl Who Played With Fire” opens Friday at the Music Box. The “red band” Restricted trailer is embedded below.