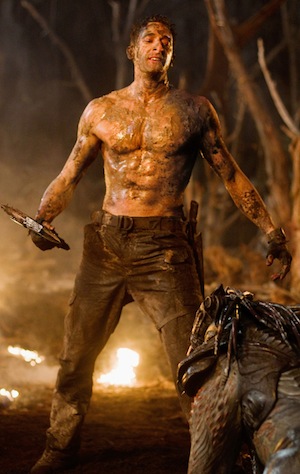 The plots of the original “Predator” and the new “Predators” are rudimentary: chase, kill. Repeat until reduce prey to an American star, plus one. Adrien Brody (“Splice,” “The Pianist”) takes over Arnold Schwarzenegger’s role; the co-survivor, verging on a love interest, was played in 1987 by a Mexican-born actress and by a Brazilian-born one in 2010. (In between, a Cuban-born actress played the comparable character in 1990’s “Predator 2.”) The novelty of the first film was the extraterrestrial who hunts for sport on earth. Trophies ensue. By pluralizing the title, Alex Litvak and Michael Finch add a minor notion: the U.S. commando characters originally created by Jim Thomas and John Thomas who saw action in Afghanistan, Beirut, Cambodia and Libya are now combatants hailing from an updated roster of global hotspots, including Chechnya and Sierra Leone. This prey with its own predatory tendencies include a Japanese yakuza, a Mexican narco-enforcer, an American psycho killer on death row and an Israeli Defense Force sniper (Alice Braga). Nimrod Antal (“Armored,” “Vacancy,” “Kontroll”) directs this lively action with style, if little else. There are fewer alien POV shots, but in the best one Antal immerses us in the sensorium of one alien disoriented in a ring of flames designed by his prey to jam his heat-signature sensors. Alan Silvestri’s assaultive scores from 1987 and 1990 are channeled here by John Debney for more ear damage. The nasal clacking rattles emitted by the dreadlocked, mandible-mouthed aliens are still not subtitled. Unlike “Avatar,” there’s no curiosity about life on the alien planet where “Predators” is set. That change of setting is the only idea in play.  In the off-season, I wonder what kind of first-person-shooter games Predators load on their computers. With Danny Trejo, Laurence Fishburne, Walton Goggins, Oleg Taktarov, Mahershalalhashbaz Ali, Louis Ozawa Changchien, Topher Grace, roughly in order of expiration. 107m. (Bill Stamets)