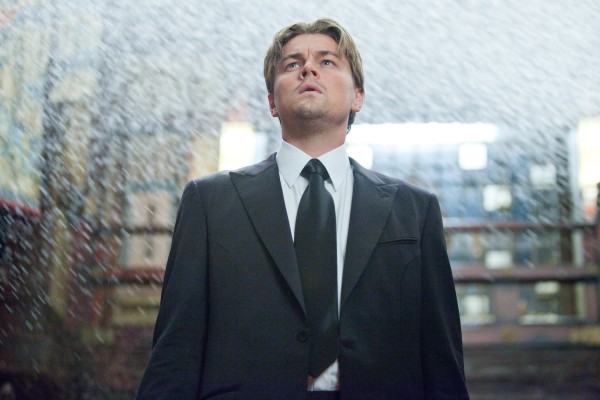 “You mustn’t be afraid to dream even bigger, darling,” a character says in “Inception” (and in its trailers), elevating an enormous weapon into frame and immediately blasting away his adversaries.

A lesson heeded over the course of a decade of writing and production on Christopher Nolan’s “Inception,” a hall of mirrors of artistic allusions in the form of a heist thriller that takes place in the space of sleep. The intricate carpentry and lacquering of “The Dark Knight” director’s filmmaking shines when you see it a second time: craftsmanship has pleasures, if not limitless mystery. Putting plot synopsis aside—the story’s contours are so neatly delineated and dovetailed, describing them at length defines the word “Spoiler”—Leonardo DiCaprio’s Dom Cobb assembles a dream team of experts, in the best tradition of heist thrillers, to commit an anti-heist in the dreams of a powerful man: inserting themselves into his subconscious and leaving behind a powerful suggestion.

Like Alain Resnais’ aggressive mind loop, “Last Year at Marienbad,” “Inception” circles memories of a past love, which may or may not be “true.” Memory is fallible, dreams are malleable. Charmingly, Nolan has said he’d only ever seen that feat of bold parallel editing after completing this James Bond-scaled movie, but he felt all the other films that had been influenced by “Marienbad” had influenced him. What other influences rest lightly on Nolan’s shoulders?

Like a dream, “Inception” is a Sargasso of esthetic detritus and “paradoxical architecture.” The screenplay’s fractures are both tectonic and architectural. Start by thinking of Philip K. Dick with yuppies instead of hippies. Michael Mann, certainly, the snappy garments of his films echoed in Jeffrey Kurland’s luxurious costumes, as well as a Los Angeles intersection that resembles the site of the epic cops-vs.-robbers of “Heat” (a crossing marked Wilshire and Hope here; Figueroa between Fourth and Fifth in Mann’s film). Kurland’s sleek rags are of a costly moment, post-Jean-Pierre Melville mantles of suits and trench coats and fabrics that have never been in the same room with a polyester blend.

The spinning of a palm-able pewter dreidl is a central device. Nolan tips his hand (and hat) with characters named “Mr. Eames” and “Mr. Charles”; among designers Charles and Ray Eames’ influential short films is a classic about… “Tops.” Ellen Page’s “architect” is named Ariadne, as in the myth of the girl who knew her way around a labyrinth; this on-the-nose footnote-in-our-faces later leads to perhaps the most beguilingly strange image, where another character tows weightless sleeping characters through a confined space, bound together as if by the thread that brought the mythical Ariadne back to the world. A forward-rushing aerial shot of a sky of Kyoto night evokes a slumbering variation of the introduction to “Blade Runner”‘s infernal Los Angeles. A brief rest on a small Francis Bacon head-and-shoulders painting has a cheek seemingly bitten away. Moments later, the face of Cobb is contorted in slow motion, rising from rushing slabs of water, like the torn faces of that painter’s career distended howls.

There are homages to Kubrick, who was widely cited in early reviews, but where Kubrick is more ambiguous, resisting definition, Nolan provides an abundance of explication, his craft more about patterning than mystery, with ample footnotes. A mirrored men’s toilet is sleek but chill like his predecessor’s work; characters move in gimbaling zero gravity, as in “2001: A Space Odyssey,” as well as a room within a room near the end that’s like the final hotel room in “2001.”

The deepest dream is perhaps the most suggestive, an immense city imagined by two people. What appears at first approach by sea as a Babylonian Beirut with a horizon infinitely populated by tall, thin, square towers, like World Trade Centers for miles and miles in a dreamt bone-white garden is revealed to be a Brasilia of the brain, built from and in the midst of nowhere and nothingness.

And of course, it is all an elemental yet brilliant schematic of the film director’s “acquiring” of the collective unconscious. “Shared dreaming” is their term of art: what is that but a movie? A roomful of narcotized dreams in Mombassa come for four hours a day, and what are they but media consumers? “The stronger the issues, the more powerful the catharsis.” What is that but the pitch of an intelligent filmmaker to a hungry producer with tens of millions to invest?

If anything goes wrong, the dream-deepening thieves land in “limbo,” a state of “raw infinite subconscious.” To answer a question in the film, “When were you in limbo?” The ten years it took to get this script made.

The possessory credit should have three names rather than one: “A Film By Christopher Nolan, Hans Zimmer and Lee Smith.” Zimmer’s never-ending score elevates the relentless verbiage of explanation, the Leo Burnett of music, able to sell anything; while editor Smith’s work finessing the layers within layers within layers of story prompts but three words: “Best. Editing. Oscar.”

“Inception” opens Friday. Charles and Ray Eames’ “Tops,” accompanied by a live score, is below.