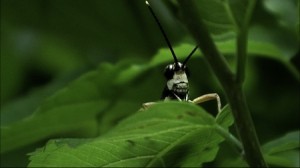 Far, far from being the sort of campy horror film evoked by her title, writer-producer-director-botanist Jessica Oreck’s artful “Beetle Queen Conquers Tokyo,” an elusively structured documentary on the rampant fixation by contemporary Japanese on insects is a lush, lyrical, simply beautiful representation of teeming nature. I’m resistant to the anthropomorphizing French nature filmmakers behind fauna-centric celebrations like “Microcosmos” and “Winged Migration,” but “Beetle Queen” is a delicious eyeful and earful throughout. Let bugs be bugs, especially when bold, bright and sensual imagery of the natural world such as this needs no explanation. There are images that you could imagine Terrence Malick, the filmmaker who wanders his set with a camera on his shoulder, would smile sagely upon. We are all as small as insects, but also as large as their feral, kinetic energy up on a large screen. Despite its subtitled Japanese soundtrack, attentive children might delight in Oreck’s study. 90m. (Ray Pride)

“Beetle Queen Conquers Tokyo” opens Friday at Siskel. The trailer is below.