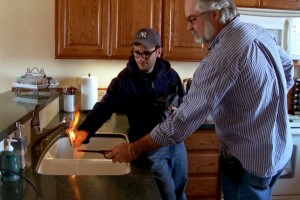 Fracking, they call it; a new way of extracting natural gas by blasting water, sand and chemicals through rock deep beneath the earth that has the potential to destroy water supplies as natural gas and other effluents shoot through the planet’s crust after “hydraulic fracturing.” Halliburton is the entity that came up with the idea. (You’ve heard of Halliburton? Among other enterprises, they’re involved in the Macondo well in the Gulf of Mexico.) “Gasland,” Josh Fox’s abashed, darkly funny personal documentary that asserts that the oil and gas industry’s newfound practice of “fracking” could destroy our inland water supplies is the scariest movie I’ve seen this year if its implications and inferences are even fractionally true. Fox, a theater artist established in New York, owns rural property and was curious when he received a $100,000 offer to buy mineral rights, and eventually traveled to thirty-two states to consider the brief history of this form of natural gas extraction. Kitchen taps that burst into flame? That’s only the beginning of what’s on-screen in this visually expressive, sometimes experimental narrative. “Gasland,” winner of a 2010 Sundance documentary jury prize, may be in a school with Rachel Carson’s momentous study of the damages of the pesticide DDT, “Silent Spring,” asking, how do these experiments with such potentially horrific hazards occur in secret? And how can a procedure that consumes so much energy and so much freshwater, in the end, be productive? The companies and states involved deny Fox’s research on-screen and in a current campaign against the film and contest its claims and contentions. Who should we trust with the essential safety of drinking water? At the very least, “Gasland” is a reminder of how far all our back yards extend. And with a movie this formally urgent, I can even forgive banjo interludes. 105m. (Ray Pride)

“Gasland” opens Friday for a week at Siskel. A trailer is below, giving a taste of the film’s tone.