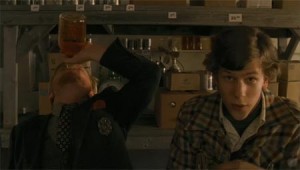 “Precious” and “twee” aren’t commonly thrown about as terms of approval, with occasional exceptions, such as the best of Wes Anderson. Storybook universes set in the modern world grate or smother without tremendous skill. Sol Tryon’s “The Living Wake” is of the trying ilk of indie films of unfathomable ambition. Mike O’Connell plays a “genius” named K. Roth Binew who has but a single day to live and decides to discover meaning on the back of his best friend’s (Jesse Eisenberg) pedal-powered bicycle rickshaw, moving toward an open-air confrontation with all the figures in his life. As much wrought as written, “The Living Wake” is twee, precious and the declamatory acting would clear a Chicago storefront theater in minutes. The intermission would extend into infinity. Would “Napoleon Dynamite” fans care for “The Living Wake”? They likely have better taste than that.  “Today! My mind tends toward the perpetual!” brays Binew. Oh, and the clothing hee-haws as well: silken smoking jackets are among sartorial signifiers of dear eccentricity. Insufferable: “a journey toward the void,” indeed. Even translated from another language, it would not gain poetry or earn a lick of care. With Eddie Pepitone, Ann Dowd, Jim Gaffigan. The producers include “Script P.I.M.P.” and “Original Media.” 92m. (Ray Pride)