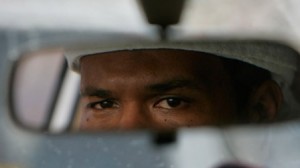 Laura Poitras’ masterful, even great documentary, “The Oath,” as intricate and emotionally complex as a novel, is a portrait of two men whose chance meeting led them across the landscapes of Afghanistan, Gitmo, 9/11 and Osama bin Laden. Abu Jandal was bin Laden’s bodyguard from 1997 to 2000; among the men he recruited for Jihad was his brother-in-law, Salim Hamdan, who had been bin Laden’s driver, and whose 2006 case, Hamdan vs. Rumsfeld, moved through the U. S. Justice system and led to a landmark Supreme Court decision, which held that military commissions violate the Geneva Conventions. Former Al-Qaeda member Jandal now drives a cab in Yemen; Poitras intercuts his story with Hamdan’s. Poitras doesn’t narrate. The stories of the two men unfold and our sympathies shift again and again; key information is parceled out as we learn about the sympathies and hopes of the pair. Is either man more complicit? Is either man wrongfully accused? Poitras, whose earlier films include “My Country, My Country,” is a master storyteller. Poitras’ and director of photography Kirsten Johnson’s images are uncommonly gorgeous, capturing such photogenic expanses as weather just beyond the razor-wire fence of the Guantánamo Bay prison as we hear the melancholy letters Hamdan has sent. Osvaldo Golijov’s score suits the brooding character of the film, which is also beautifully edited, both in pace and patient, observant shot selection. 91m. (Ray Pride)

“The Oath” opens Friday at Siskel.