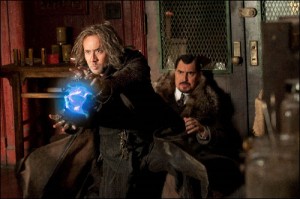 “Suggested by” the segment of the same name in Walt Disney’s animated “Fantasia” from 1940, this PG-rated Walt Disney Pictures family-action-adventure is an enervating, overlong tale of a good sorcerer training a chosen one to exterminate an evil sorcerer. Then our hero wins over his childhood sweatheart for an all-night flight aboard a Chrysler Building eagle-style gargoyle to Paris for lattes and croissants. Compared to recent boy-with-powers-saves-world films, this Jerry Bruckheimer junk is far worse than “Percy Jackson and the Olympians: The Lightning Thief” and a tad worse than “The Last Airbender.” Jon Turteltaub (both “National Treasure” films with a third one threatened) directs an uninspired screenplay by Matt Lopez and Doug Miro and Carlo Bernard set in CGI-NYC. Balthazar Blake (Nicolas Cage, “Kick-Ass,” both “National Treasure”‘s) is a 777th-degree sorcerer from 740 A.D. who searches for centuries and finds a 10-year-old New Yorker in the year 2000. The late Merlin designated a super-sorcerer to wear his magic dragon ring and stop evil sorcerers from “enslaving mankind,” although their labor needs would seem more easily met by a few waves of the wand. These evil ones are later said to aim to “destroy the world,” with no other world in mind. Sorcerers seem not so smart. The plot picks up ten years later. Now a NYU physics nerd, Dave (Jay Baruchel) is the badly cast apprentice. Cage is at his blandest. No good spell is cast by “The Sorcerer’s Apprentice.” Except for a minute or so of sparkly confetti effects in a Chinatown dragon bout, this never enchants. With Alfred Molina, Teresa Palmer, Monica Bellucci, Toby Kebbell. 110m. (Bill Stamets)