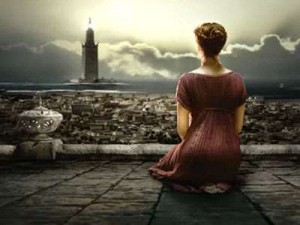 Spanish director Alejandro Amenábar (“The Others,” “Open Your Eyes”) and co-writer Mateo Gil present an empowering tale of Hypatia (Rachel Weisz), a teacher of Greek philosophy, mathematics and geometry in Alexandria who was dismembered and burned by a political mob of anti-pagan Christians in 415 A.D. Later saluted as a martyr, she inspired literary and feminist paens, as culled by Polish scholar Maria Dzielska. A key co-star in this educational entertainment is the city of Alexandria, as recreated on the island of Malta. “Agora” consultant Justin Pollard, co-author of “The Rise and Fall of Alexandria: Birthplace of the Modern Mind,” hypes Alexandria as “the only modern city in the ancient world,” “the most cosmopolitan city on earth” and “the most extraordinary city on earth.” Amenábar’s best idea is using high-altitude CGI vistas from over the Egyptian city that zoom into space. This motif beautifully evokes Hypatia’s unbound eye of inquiry. A panoply of astronomical, astrological and ideological references are channeled through these eye-opening shots, often framed by ocular circles. As in Agnès Merlet’s 1997 “Artemisia,” a father mentors his daughter to excel in a world of male envy. (One omission is the mystical neoplatonist tendencies Hypatia may have shared with her father Theon, author of the esoteric tract “On Signs and the Examination of Birds and the Croaking of Ravens.”) Hypatia navigates admirers and betrayers in the religious tumult of her era, when heliocentrism was heresy. “My goal, formally speaking, was to make the audience feel like they’re following a CNN team documenting something that happened in the 4th century,” the director says in his press notes. “That sense of urgency, like breaking news.” “Agora” is open to interpretation as commentary on all manner of twenty-first-century fundamentalists who target secular education (Texas textbooks?) and offensive icons (Buddhas of Bamiyan?). Stonings of women with minds of their own are not new. Ideas matter is the message of this high-minded alternative to non-brainer blockbusters. With Max Minghella, Oscar Isaac, Rupert Evans, Ashraf Barhom, Sami Samir, Michael Lonsdale. 127m. (Bill Stamets)