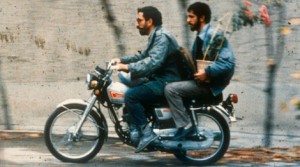 Even he’s shifted to making work on video, Iranian filmmaker Abbas Kiarostami’s archive of features and shorts on film are being restored, the latest being the deeply eccentric yet thrilling “Close-Up,” his 1990 fictional documentary about an unlikely film buff, a printer who resembled the filmmaker Mohsen Makhmalbaf (now one of Iran’s leading expatriate political activists) and repeatedly performed the deception of impersonating the filmmaker. Kiarostami convinced the figures involved in the case to play themselves, but also filmed the young man’s trial, leading to a mix of the true and the recreated that has almost unfathomable depths. A dispossessed worker who loves movies, who can only be heard, can only get “attention and respect” by impersonating a filmmaker he admires: it not only says much about filmmaking but about the individual under autocratic regimes.  (Kiarostami’s latest film has a mirror in its title that would suit “Close-Up”: it’s called “Certified Copy.”) Duration and the warping of fact into fiction have been a mainstay of Kiarostami’s work all the way back to short films like “Bread and Alley,” which makes comedy of kids and dogs in the plainest, most effective way. But, as Kiarostami says in a video interview on the Criterion edition that followed the making of this new print, “‘Close-Up’ is present in some way in every film I make. At the least, my standards for the acting, for the screenplay, for people’s inner conflicts, are measured against my standards in ‘Close-Up.’ That way I find out how close I am to reality in the film I’m working on.” It’s a high standard. “Close-Up” is slight yet dense, prismatic, layered, with as many if not more levels than the simpler construct that is “Inception.” 98m. (Ray Pride)